Okay, the Red Sox are off to a slow start. That has happened in April many, many times. It's typically followed by an excellent May.

Opening Night.
It was a great time. I went with my daughter Kara. A surprisingly warm night. The kid from the Herb Brooks "Miracle" speech You Tube video was a real kick.

Pedro milked the first pitch for all it was worth and then some. Live performances by Steven Tyler and Neil Diamond. As far as the annual Fenway upgrades, they actually replaced the 1934 wooden grandstand seats. The new ones have springs. Other than that, they are identical. Same flat wooden slats. Same cramped size. Unbelievable. Larry Lucchino said they did it because the wooden seats - the last ones remaining in the Majors - are part of the tradition. Larry, have you ever spent five hours sitting in one? Think maybe there's a reason that no one else has them anymore? Of course, cramped as they are, the Red Sox have no problem filling them night after night.

The opener was a nice win over the Yankees. Tuesday and Wednesday we saw the bullpen blow leads.


Off to KC.
While I was doing some pre-season work on the Cape house the Sox were in Kansas City, where they have some crazy little women. They lost on Friday night, making three straight L's and dropping the Sox to 1 and 3. Two wins over the weekend and it was back to .500.


We head to the Mini-apple.
On Monday the Twins opened their brand new ballpark, Target Field, hosting the Red Sox. Last May Kara and I flew out there for game one the final Red Sox series at the Metrodome. On Wednesday we flew out for game 2 of the first Sox series in the new ballpark. I thought about going to game 1 there, but it was sold out, and the 3PM start would have made flying in and back on the same day a challenge. Furthermore, this was the first game at their beautiful brand new outdoor ballpark after playing at the horrible Metrodome with the crappy fake field and the big blue baggie for a right field fence the for almost 30 years. I didn't want to be some jerk wearing the wrong jersey and rooting for the visitors at a game that the Twins should get to win. 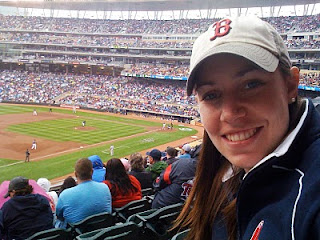 Game 2 was different. No opening day pressure. It's a very nice ballpark, right downtown. A decent number of fans were wearing Red Sox stuff, but vastly outnumbered by Twins fans, all of whom were Midwest friendly. One commented that they had been to Fenway once, and they thought the smell was really unique. The concourses are very wide and full of concessions. The friendly folks behind the counters were really slow - as in two innings to get a hot dog a beer. There was no local beer or local cuisine. Maybe there isn't any.

They didn't do any of the stupid minor league stuff you see at a lot of new ballparks, like having cheer girls shoot t-shirts into the stands. Okay, they did one bingo game between innings, but it was less intrusive than the ketchup-mustard-pickle race featured in a lot of new parks. They did shoot off fireworks when a Twin homered. When Jason Kubel came up a few fans tried make a "koo"sound like the "Youk" chant you hear everywhere, but it paled in comparison. No waves, of course. You only get that at Fenway. There were no special songs. No Minnesota version of "Dirty Water" or "Deep in the Heart of Texas" or "I Left My Heart in San Francisco" or "New York, New York." Of course, the Twins lost the game. Maybe they save the song for wins, like the Sox do with "Dirty Water."

Editor's note:
I should add that I think it's incredibly cool that my daughter likes to go on Red Sox road trips with me. We've gone to Montreal, New York (3 different ballparks), Chicago, Oakland, Phoenix, San Francisco, Minnesota (2 ballparks) and Baltimore in a couple of weeks. Does it get any better than that?

Back at Fenway.
On Friday night, Kathy and I went and sat, not in Section 29, but in Section 19, Box 42. That's in front of the walkway, right behind home plate. Fabulous view. Bigger, much more comfortable seats . Padded, with cupholders and leg room. Beer served in the stands. Rob Barry, the peanut vendor with the best arm in the majors, was on beer duty. An older gentleman dried off the seats (it had been raining all day) and we tipped him. I was surprised at how few others did. In about the 4th inning a couple of guys who clearly didn't belong there showed up to take box seats in the next section. I think they tipped the guy to let them sit there. 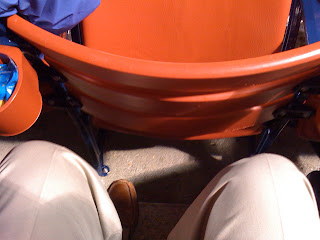 Jerry Remy's pen.
We were under the backstop screen, and up on the overhead part of the screen there was a pen. It appeared to be one of those blue and white Bic pens that has four colors of ink: blue, black, red and green. I recall hearing Jerry Remy say that he uses one of those Bic pens to score the game. Blue for most entries, green for a hit, red for an RBI, black for an error. I figured that was Remy's pen. Jerry must have dropped it during a game and it slid halfway down the backstop screen and got stuck there. 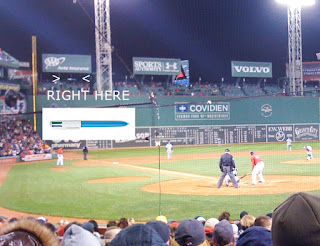 The two-week mark.
So here it is, two weeks after opening night. The Red Sox are 4 and 7 and losing 4-0 to Tampa Bay as I write this. In several of the recent losses the Sox have had three starters hitting well under the Mendoza line. (In case you're not familiar with that expression, it refers to batting .200. When you go above or below that mark, you've crossed the Mendoza line. It refers to Mario Mendoza, a former Pirate and Ranger who actually had a career average of .215 but is saddled with the image of a lifetime .200 hitter). Big Papi, who looks not as big in the shoulders as he was, is batting .171. JD Drew makes him look like the Ortiz of 2003-2007, batting an embarrassing .131 with a team-leading 16 strikeouts.

Run prevention?
That was The Plan for 2010. How do you expect to prevent runs when your new shortstop is tied for the Major League lead in errors. Three in two weeks paces at 39 for the season. Two of those cost the team wins. To put that in perspective, Edgar "Ren-a-wreck" Renteria had 30 for Boston in 2005. Julio Lugo made 19 in 2008, and he only played half the season. The error count is also suspiciously low, as many plays that are scored as "hits" are really errors. What's more. it doesn't account for bad throws that Youk is able to dig out of the dirt or bad relay throws that fail to get the runner at first on a routine double-play ball. Scutaro made another bad throw just now as I'm writing this.

The Sox wound up losing 7-0, their fourth straight loss.

But hey, it's only two weeks, and they typically play well on Patriots' Day.

Posted by Unknown at 1:29 PM No comments: