Catch a wave and you're sittin' on top of the world

This isn't the best Fenway wave I've ever seen, but I happened to be in the State Street Pavilion last week and recorded it. Then I felt like writing about waves. Why do people try to start a wave when the other team is up? It usually makes no sense, but this past Saturday night it did.

I was watching the Red Sox game in Baltimore in my mini sports bar setup downstairs. Three HD TV's with Surround Sound with the Sox game filling the room, plus a laptop with MLBTV showing the Angels-Rangers game. My wife was in the family room watching Lonesome Dove for what seemed like 8 hours.

The game was tied 3-3 at the time, and over the TV's I could hear a nice loud "Yooouuuuuuk" from the crowd of 39,000 as #20 stepped into the batter's box. Okay, he stepped halfway into the batter's box. I have a great view of home plate from Section 29 at Fenway, and in the first or second inning - before the chalk lines are obliterated - it's easy to see that Youk's back foot is well out of the box. He never gets called on it, though.

Back to the game. Youk has a chance to put the Sox ahead, and the crowd starts up a very decent wave. The best I've ever seen outside of Fenway. I should point out that in my ballgame experience, which includes seeing games at 35 Major League parks, you hardly ever see a wave anywhere but at Fenway. I saw a half-baked one last year in Seattle, but other than that nothing would qualify as even quarter-baked. This one in Baltimore was completely baked (see footnote below), and the reason was that probably 70% of the fans were Red Sox fans.

Why not? It's a great ballpark, you can fly on AirTran or Southwest for very little money if you book a couple of weeks out, and you can get great tickets directly from the Orioles web site. No need to pay the scalper rates they charge at Stub Hub.

Youk got a hit and drove in a run that put the Sox up 4-3. It eventually turned into what looked like a laugher, with Boston leading 11-3 in the 9th. Things did get a little squeaky in the bottom of the 9th, as the Manny-Ramirez combo (Manny Delcarmen and Ramon Ramirez) proceeded to give up back-to-back home runs and then load the bases on walks. Suddenly it's 11-5, and the tying run is in the hole. Remember, these Orioles were down 10-1 to the Red Sox in the 7th inning back on June 30th and wound up winning the game. Not to worry, though, a double-play ended it and the Sox Magic Number to make the playoffs dropped to 9.

Footnote: The "completely baked" line was lifted from "The Graduate." When Ben tells his father that he's going to Berkeley to marry Elaine, his father says, "That's fantastic. When did you two decide this?" Ben says that Elaine doesn't actually know yet, and his father responds that the idea sounds half-baked." Ben's comeback: "No, it's completely baked.".

The other night I was watching the Red Sox on NESN and simultaneously checking in on the Yankees game on mlb.com. Great picture, by the way. Andy Pettitte has gotten into the 7th inning with a perfect game. Two outs. On YES, the Yankee network, they go to a clip of David Wells being picked up and carried off the field (no easy task with Boomer) when he had a perfect game. Don't they know that's a guaranteed jinx? You don't mention it until it has actually happened. So what did happen? The very next batter hits a grounder to Jerry Hairston, Jr. at 3rd and he boots it. There goes the perfect game. The next batter hits a clean single to left, and the no-hitter bid is history. The final score was 5-1, Yankees, so it wasn't even a shutout. 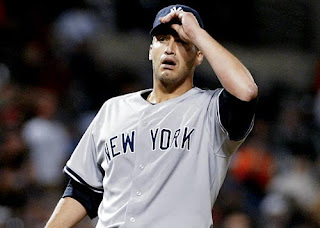 Andy wasn't particularly gracious about it, as you can see from the photo. 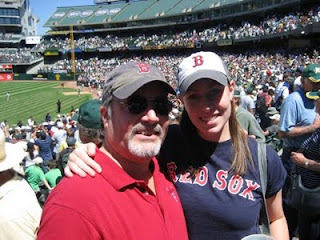 In contrast, let's look at June 7, 2007. I was in Oakland with my daughter Kara. Curt Schilling was on the mound for the Red Sox for an afternoon game. The A's had won three straight from the Red Sox, and Curt was intent on being a stopper. In the top of the first David Ortiz homered, and that was the only scoring of the game. Kara and I were, as usual, scoring the game, and Schilling was putting up nothing but zeros. We noted it with a gesture of the pencil, but said nothing. In the 7th inning, with a perfect game going, there was a room-service grounder to Julio Lugo at short, and Lugo booted it. There went Schill's perfect game. In typical Schilling fashion, he just soldiered on. It went to the bottom of the 9th. Two outs, no-hitter still intact. Varitek puts down a sign and Curt shakes him off. On the next pitch Stewart singles to right and ruins the no-hit bid. The next guy is retired and the Red Sox win, 1-0. A complete-game one-hit shutout for Curt Schilling. 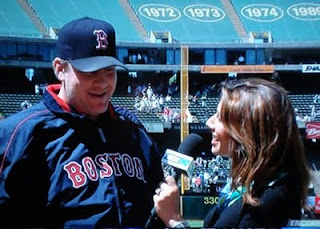 Unlike Andy Pettitte, Curt lay no blame anywhere but at his own feet. "With two outs I was sure I had it. I shook off Jason Varitek and now I'll have to deal with a 'what-if' the rest of my life. Obviously I made a mistake when I shook off 'Tek." He should have been angry about Lugo's sloppy error. If Lugo had fielded that grounder, and if everything else happened exactly as it did, Shannon Stewart would not have stepped into the batter's box in the bottom of the 9th and Schill would have a perfect game.