Back From Fenway South 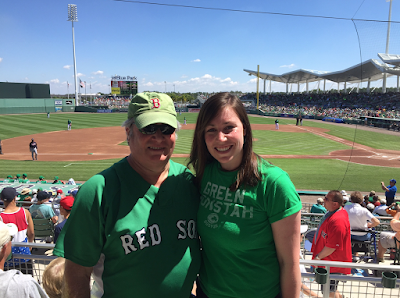 So how are things looking?

Is worst-to-first-to-worst-to-first a complete pipe dream? Quite a few writers don't think so. Most are predicting the Red Sox to finish first in the AL East. A few, like Tim Kurkjian, think it will be the Baltimore Orioles, a team with 96 wins in 2014. That's 25 more wins than Boston had. I'm sure Tim is very objective, but for what it's worth, when I lived in Baltimore in the late 80's Tim covered the Orioles for the Baltimore Sun.

What exactly would enable the Sox be able to go from last place to first this year?

First, it's do-able. The Red Sox went from 69 wins in 2012 to 97 in 2013. A 28-game improvement. A similar improvement in 2015 would give them 99 wins. No one did that last year. Two years ago, following 2012, I blogged about 1989, when the Orioles had a 33-game improvement from 1988, going from 64 wins to 87, and weren't eliminated from the AL East race until the final weekend (no Wild Cards back then). If the Sox could do two-thirds of that they might win the division, and if the National League could win the All-Star game so the Series would start in Boston we might clinch a championship at home. I wish I'd put some money on that.

I thought this column was about 2015.

It is. We took in three games at jetBlue Park (the lower-case j in jet is intentional) and here are my takeaways: First, it was a gorgeous 83 with an azure blue sky every day. Just fabulous. Went to the beach in Naples. Hated to leave. Oh, yes, the games. We had several veterans mostly going through the motions. Not trying to get a hit or anything, just working on their timing. Pitchers tweaking their mechanics and looking to improve their command bit by bit. Or so they tell the reporters. "Hey, Clay, you looked pretty bad against the Phillies today...are you really supposed to be the #1 starter?" Clay responds with something like, "I wasn't really trying to get anyone out, I was working on my slider mechanics." Okay, then. That explains it.

Really, Buchholz looks pretty good most of the time. Rick Porcello showed promise. A guy from Detroit told me that Tigers fans are upset that Porcello was traded away. That's a good sign. Joe Kelly, who I remember seeing pitch for the Y-D Red Sox in the Cape Cod League wasn't fooling any of the Mets batters on Monday, but looked better than the box score would indicate. Another guy who played for the Y-D Sox, Brian Johnson, shows promise as a reliever. Here's a tid-bit on him: his mother and his aunt were the Doublemint Gum twins. Remember "Double your pleasure, double your fun...?" Joe Castiglione will no doubt throw that in a few times if Johnson gets called up. I'm a little worried about Koji Uehara. Dalier Hinojosa did himself no favors and won't be coming north.

Guys like Ortiz don't have to try hard in spring training because his spot in the lineup is guaranteed. Guys like Pedroia try hard anyway because he's like that. Victorino was announced as the starting right fielder. HIs defense looked great but his hitting was nothing. Guys who would love to make the team try really hard. Brock Holt always looks good. They should trade Bogaerts to Philly for Cole Hamels and put Holt at short. That's my .02. Jackie Bradley Jr. was hitting something like .290 (let's do the math: that's better than the .198 he hit in 2014 but much worse than the .419 he hit in spring training in 2013 that got him to the majors. He struck out with the bases loaded to end an inning and hit into two double-plays. Meanwhile Mookie Betts was clobbering the ball (I saw three lead-off doubles) and running hard. It would be crazy for him not to be the starting center fielder. He did let a couple of balls go over his head in the triangle that Bradley might have had, but Mookie sure looks for real. Blake Swihart, who is fourth on the catcher depth chart, looks very good, especially at bat. A switch-hitter with power. He does need some work on defense (I saw balls in the dirt bounce off him three times), but he's a gamer and I hope they don't trade him. He'll start the year in Pawtucket.

The reason so many writers are picking the Sox to win the division is the "dramatically improved offense." Meaning, of course, Pablo Sandoval and Hanley Ramirez. A lot seems to be riding on them. Pablo is a guy who has a guaranteed spot at 3rd, so he doesn't have to try hard this spring. He looks much less fat than I expected based on pictures in the paper a couple of weeks ago. He did have a nice opposite field hit. He also hit into two 4-6-3 double plays. Nothing special defensively, so we'll just have to wait and see in April. Hanley worries me. He's hardly hitting. He did have a line drive off the faux-Green Monster but was thrown out trying to stretch it into a double. To be fair, a run did score on the play. He also made one running catch in left-center, almost colliding with Betts. BUT...the rest of the time he looked like he had asked Manny for tips on how to play left field.

It was a great trip.

As I mentioned, it was sunny and beautiful. The roads have no potholes. The median strips have plants and flowers. Everyone at the games was in a great mood. I was delighted to have my daughter Kara join me. (I feel badly that my wife was stuck at home selling houses, but March is a very busy season in real estate.) I can't think of a better way to wrap up a horrible winter. Does Hope Spring for the 2015 season? Absolutely. That's what Hope Springing is all about.

Posted by Unknown at 5:44 PM No comments: