My take on soccer

This year the media, ESPN in particular, has tried harder than ever to make soccer a big deal in America. It isn't working.

Last night I was watching Sports Center and they were talking about the Team USA game today. They had four anchors, three of them former pro athletes. Every one of them pronounced Ghana "Goo-ana." Two weren't sure what continent it is on. To put that in perspective, my daughter did a project about Ghana in 3rd grade - it might even have been 2nd grade. Every kid in the class knew how to say it and where it is. Why don't the ESPN anchors know? Because they don't need to know. It isn't important to them.

We have five radio stations on Morrissey Boulevard in Boston. About 225 employees. How many are avid soccer fans? Two morning guys, plus an intern and one Air Personality's husband. That's 222-4. 222-2 if you only count paid employees. I randomly asked 25 employees if they could name anyone from Team USA. Only one - the intern - came up with a name.

One more piece of evidence: I'm on Cape Cod this weekend. Around 6PM today I went to Bass River Sports World which is right nearby us. They have miniature golf, a driving range, go carts and right next to each other they have batting cages and a full-sized soccer net. 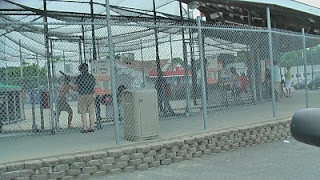 The photo above shows the batting cages with ladies and gentlemen, boys and girls, trying to launch one over an imaginary Green Monster. 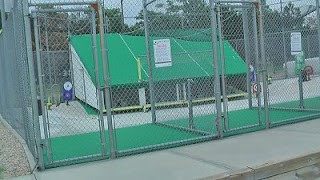 This photo of the soccer net, taken ten seconds later, shows absolutely no one trying to bend it like Beckham.

One of the few soccer fans at work accused me of hating soccer. I don't hate it. I just don't like it much. The goalies don't even wear the same uniform as the rest of the team. What's that all about? Players run back and forth, back and forth, and nobody scores. You have to listen to the constant buzz of the annoying Vuvuzela horns. You'd think it's the Year of the Cicada. They're worse than the cowbells at Tropicana Field. (By the way, the old folks in Tampa only ring the cowbells when the scoreboard tells them to.)

The American audience has plenty of exciting pro and college sports to follow, and they just don't have time for soccer. What would you rather watch? A 103-101 Celtics-Lakers game, a 14-inning 7-6 Red Sox-Yankees game decided by a walkoff at 1AM, or a 0-0 soccer match between Uruguay and Slovenia?
Posted by Unknown at 8:58 PM No comments: