Spenser is not completely dead yet

Last January, Robert B. Parker died.
I posted about it in this blog. I had read every single Spenser mystery, every Jesse Stone mystery, all the Sunny Randalls, and a few books by Parker that starred none of the aforementioned. I'd read Spenser books every summer since 1981.

But wait!
This summer a posthumous Jesse Stone book was released, which I read by the pool on the Cape. 2010 was a very nice summer and that helped.

Then I checked Amazon.
Okay, my wife did. Turns out that there was one more Spenser book to be released in October. I got it, and tried my best to read it slowly. Parker featured very short chapters, so it was easy to tell yourself, "I'll read just one more, then go to sleep" and wind up reading eight or nine more.

But this was really it, and I wanted to savor it.
Painted Ladies, the final Spenser book, featured lots of typical Spenser stuff, which is a good thing. It had too much drooling about how fabulous Susan is, but almost every Spenser book did. What surprised me a little is that only a few of the other regulars made an appearance.

State Police Homicide Commander Healy was there, as were his Boston cop friends Frank Belson and Martin Quirk. Rita Fiore, a lawyer with whom had a brief fling about 2o books ago and pops in with legal advice and flirty talk in a number of the books - including some of the Jesse Stones - has a cameo. He introduced a new Boston Police detective, Kate Quagliossi. A character with lots of potential that we'll no doubt never see.

Completely missing:
Hawk (that may be a first) , Henry Cimoli at Harbor Health Club, his bad guy posse members Vinny Morris the Shooter, Chollo, and Tedy Sapp. Boston drug lord Tony Marcus and his posse of Ty Bop and Junior. It was just Spenser doing it himself.

But wait...Spenser's not completely dead yet.
(A nod to Monty Python's "Holy Grail" for that line.) I just found out that there's still one more Spenser novel yet to be published. The title is Sixkill and the expected release date is May 3, 2011. I've already pre-ordered it.

Posted by Unknown at 8:37 PM No comments: 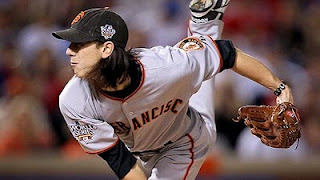 It was October 3rd, 1951 at the Polo Grounds in New York.
The Giants had trailed the Dodgers by 13-1/2 games in August and wound up in a dead tie at the end of the regular season. Bobby Tompson hit a home run, called "The shot heard round the world" (it was actually only a 279-foot line drive shot) and play-by-play guy Russ Hodges yelled, "The Giants win the pennant" 13 times in a row.

But they didn't win the Series. The Yankees did. It was their 3rd in a row and 14th overall. The Giants were back in 1954, facing the Cleveland Indians. The Indians won 111 games in 1954, but were swept in the World Series by the Giants. Neither team had won since.

Go ahead, mess with Texas
The Rangers, meanwhile, had been around since 1961, originally as the replacement Washington Senators, then moving to Arlington in 1972. Never won a pennant before this year. No team from Texas has ever won the World Series. The Texas total of non-winning seasons (combining the Colt 45's/Astros and the Rangers) is now at 87 and counting. Note that it's longer than the now-forgotten drought of the Red Sox.

So it wa a 56-year wait.
Tim Lincecum, who looks like the murderer kid last season on "Desperate Housewives," is fun to watch. I mentioned in an earlier post that I saw him play several times on Cape Cod for the Harwich Mariners. And Buster Posey, the shortstop-turned-catcher for the Yarmouth-Dennis Red Sox in the Cape League, becomes the first rookie ever to hit cleanup in the World Series. Then there's Edgar "Rent-a-wreck" Renteria, who was horrible for the Red Sox in 2005, but got the walkoff hit for the Marlins back in 1997, and as a Cardinal hit the Series-ending tapper back to Foulke when the Sox won in '04. He hit the home run that was the difference tonight. So congrats to the Giants.

The real fun already happened.
That was in October, when the Red Sox knocked the the Yankees out of 1st place on the final day of the regular season, then the Rangers knocked them out of the playoffs. Any year when the Yankees last game is a loss is a good season.