A visit to SunTrust Parek in Atlanta. Bucket List Once Again Complete

I had to top it off in Atlanta.

I started my Bucket List of seeing games at every Major League Ballpark back in 1989 when I read Dodger Dogs to Fenway Franks by Bob Wood. He mostly was rating the ballparks of the time based on the food. Dodger Stadium came in first, Fenway Park came in last. As he said about Fenway, "How could such a great place have such awful food?" This embarrassed the Sox ownership, still the Yawkey family then. As a result, Colonial Provisions lost the contract for Fenway food and Aramark has had it since then.

My ranking is based on the ballpark experience.

In 1989 I had already been to four parks: Fenway and DC's Griffith Stadium back in the 50's, plus Memorial Stadium in Baltimore and Angels Stadium in Anaheim in the late 80's.

I knocked off six more in the 90's (including the brand new Turner Field in Atlanta during the Inaugural Season), 5 more in 2000 alone, and by 2005 I had my daughter Kara as my Ballpark Buddy going on road trips with me. By 2010 I was up to 35, and in 2014 we went to Busch Stadium in St. Louis and Great American Ballpark in Cincinnati. At that point I had been to games at 41 ballparks: all 30 of the current ones and 11 more that are gone or no longer used for baseball. That completed the Bucket List. For a while.

Atlanta decided to get rid of Turner Field, only 20 years old.

That seems like a pretty quick turnaround, but the majority of ballparks - 16 of other 29 - are actually newer than Turner. Only 13 are older. Only 6 were opened before 1990. 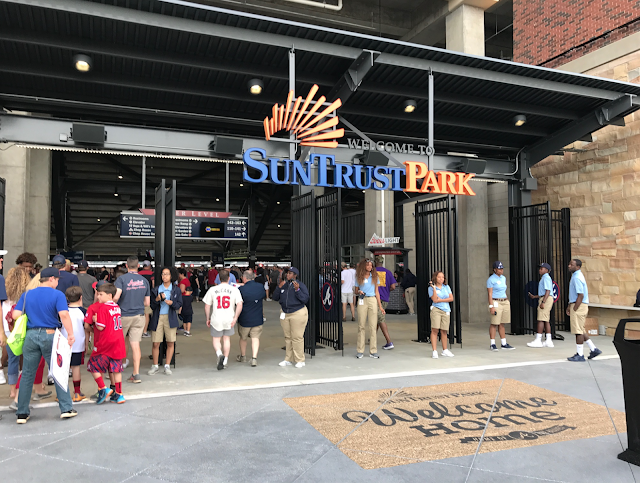 In Atlanta they remember where the team came from.

The Braves are the longest-running franchise in all of baseball. The team has been in Atlanta since 1966, but began play in Boston in 1871 and spent 82 seasons there. 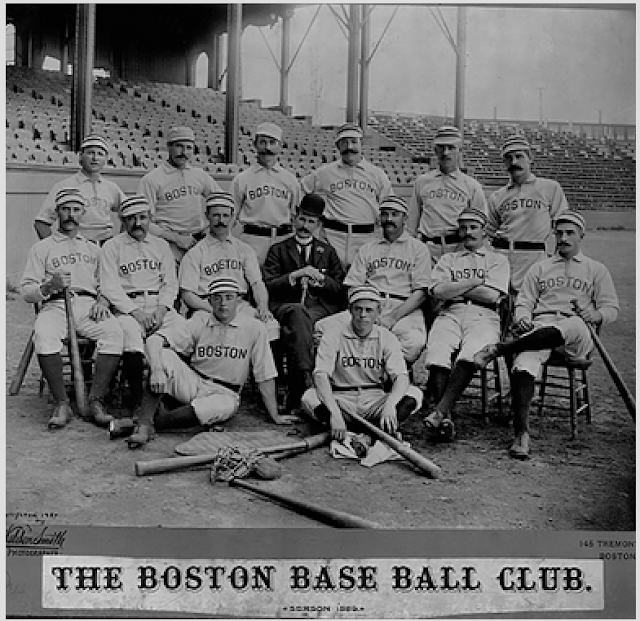 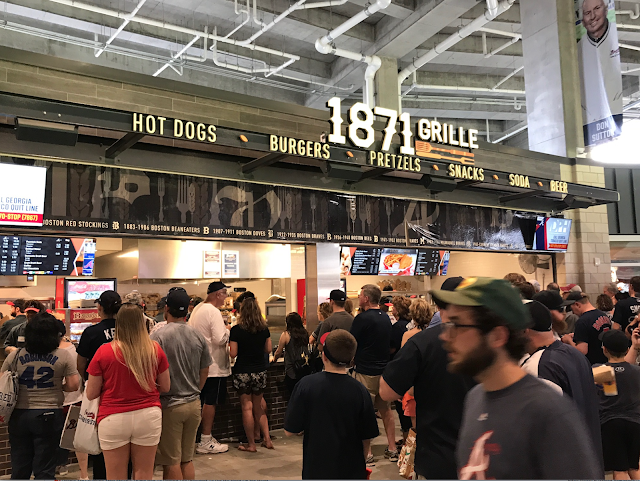 Many of the food concession stands are named 1871 Grille in honor of that.

In the final week of spring training in 1953 owner Lou Perini of Framingham got tired of the Braves being badly outdrawn by the Red Sox every year since 1901 and decided to blow town and go Milwaukee where his AAA team played. The Braves stayed there for only 13 years, so Turner Field outlived the Milwaukee Braves. 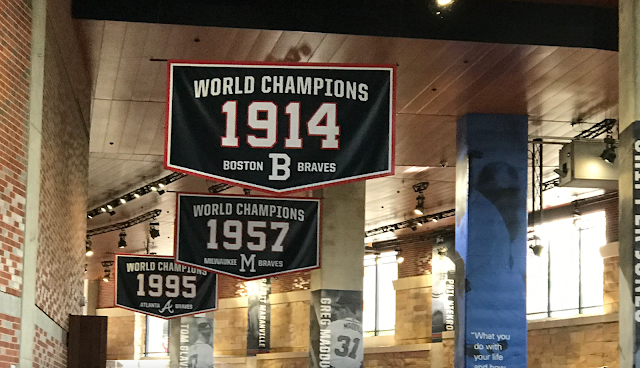 It's the only MLB franchise to win the World Series playing in three different cities. 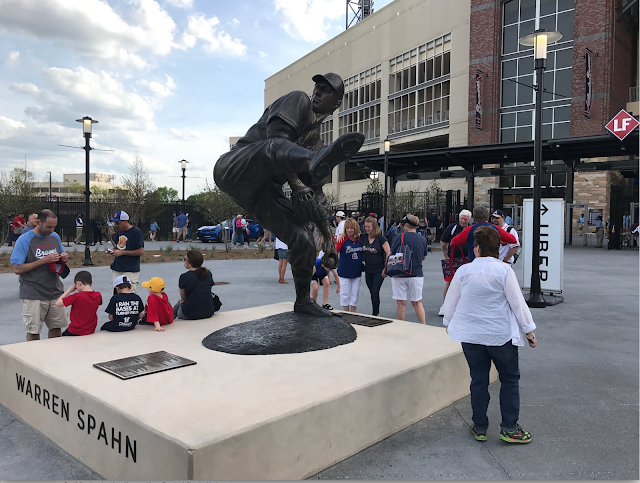 Warren Spahn was a pitcher for the Boston Braves from 1942-1952 and the Milwaukee Braves from 1953-1964. Spahn and Johnny Sain were the star pitchers for the Boston Braves in the 1948 World Series. The popular slogan was "Spahn and Sain and pray for rain." SunTrust Park has this statute of Warren Spahn with his famous high leg kick at the entrance even though he retired before the Braves moved to Atlanta.

Okay, tell me about Atlanta today.

The new ballpark is about 10 miles north of downtown, where the last two ballparks were located. If there's any public transportation heading that way I didn't see any evidence of it. But there's a lot of parking. Lots. 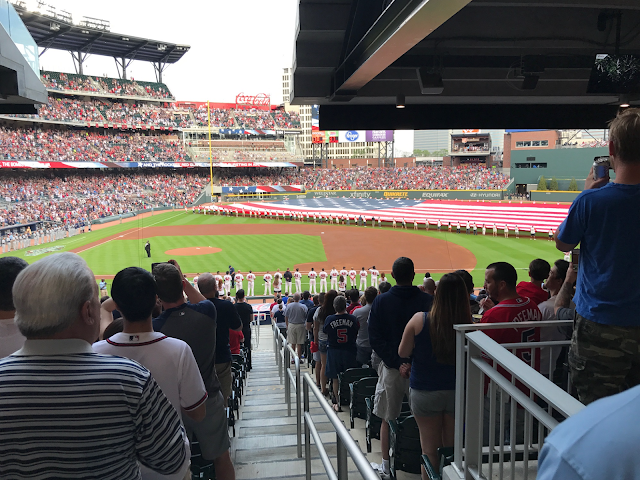 The Opening Day flag was held horizontally across the outfield. Only Fenway has a wall big enough to hang a huge flag.

How's the park itself?

Really nice. They all are, except for Oakland and Tampa Bay. But seeing a game at those places is still fun. With the Raiders getting out of Dodge for a second time, Oakland will either get a new ballpark or lose the A's as well. 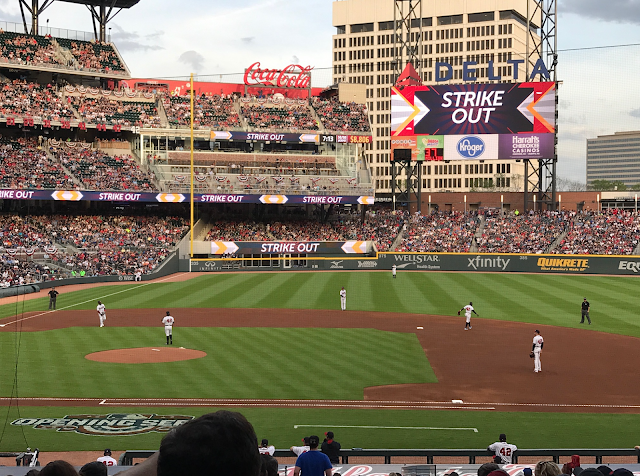 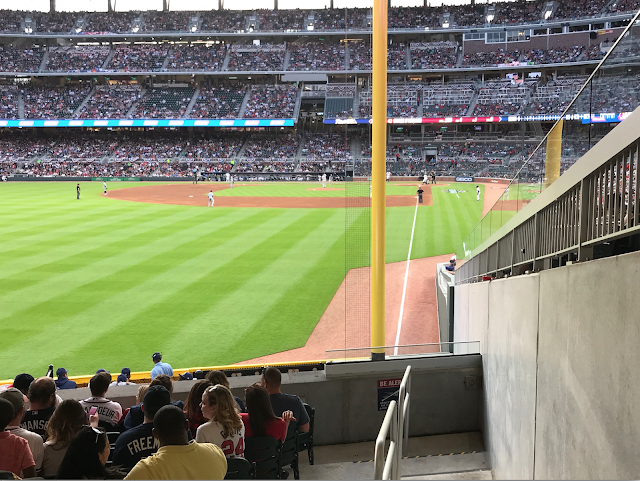 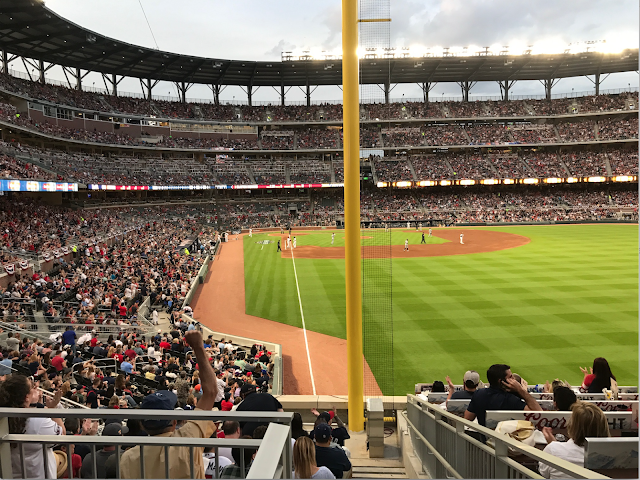 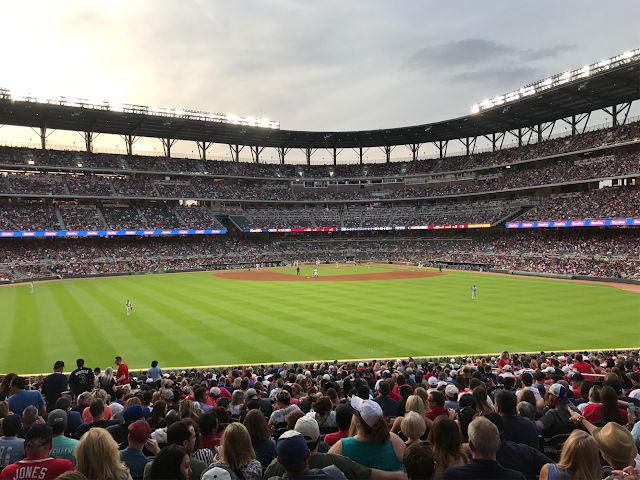 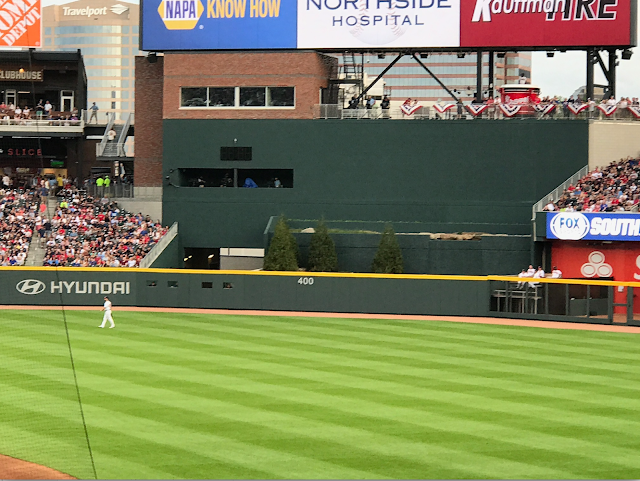 They put some little Christmas trees in the batter's eye in center field, but they weren't spaced that well. 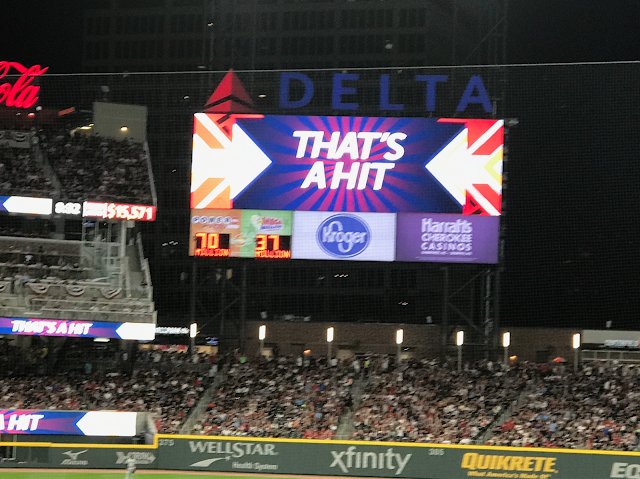 In case you were looking at your phone and missed a hit, the jumbotron reminds you. 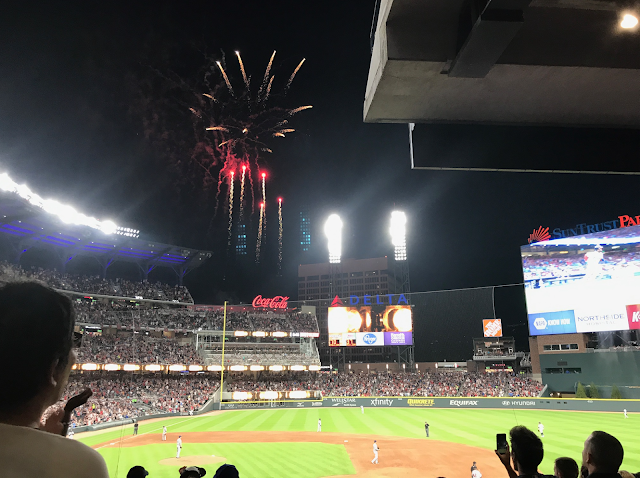 A Braves home run gets fireworks. I saw this happen indoors once at Olympic Stadium in Montreal.

Well, the Tomahawk Chop, of course. There's no PC issue about it there at all. It's the "Sweet Caroline" of Atlanta. Ludacris lead the crowd for the first chop.

Do they do a stupid 5th inning race?

Sure. Everywhere but Fenway does that. Milwaukee has a sausage, a brat and a hot dog racing. In DC it's George Washington, Thomas Jefferson, Abraham Lincoln and Teddy Roosevelt. Teddy always loses. At SunTrust it's sponsored by Home Depot and they have a hammer, an orange bucket and a paint brush racing. I won't bore you with a picture. A couple of musical tidbits: RA Dickey's walkup music is "Game of Thrones"...and you know how every park (except Fenway) has an organ playing "If You're Happy and You Know It" or "Charge" or that sort of thing between batters? They had the organ play "Battle Hymn of the Republic." In Atlanta? Surprised me.

The Braves beat the San Diego Padres, 4-2. Both teams hit back-to-back HR's. The leadoff guy for San Diego was Manuel Margot, traded by the Red Sox to get Craig Kimbrel.

Posted by Unknown at 9:20 PM No comments: