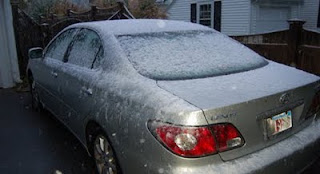 It's not the Blizzard of '78
No, but we actually have snow falling on October 18th. Just enough to accumulate a little on a parked car. Maybe a shrub here or there. Enough to obliterate the lines at the Patriots game in Foxborough. That's not bothering the Pats, who are wearing their old Boston Patriots uniforms as they trounce the Tennessee Titans, 59-0. The Titans, meanwhile, are wearing Houston Oilers uniforms because they have no throwback stuff. The referees are wearing ugly throwback shirts that are orange and white striped that they apparently wore when the AFL started 50 years ago. Most likely most people didn't know they were orange back then because all the TV's were black and white.
Earliest snow in Boston
The earliest date we've had 1" of snow is November 10th. That was in 1976. We had an ice storm, of all things, on November 11, 1967. No one expected it, of course, and there were traffic jams all over the place even though it was a holiday.
Earliest snow I've seen
September 24th, 2000. It was in Denver. I was going to a Rockies-Marlins game on the way home from San Francisco. The snow came overnight and melted by game time at 1PM, but it was still snow in September. People at the game weren't talking about it, so maybe it's not unusual there. But here everyone is talking about it today.
Watch the news tonight
The TV meteorologists will be out of their minds. Weather people, in case you didn't know, hate nice days. Nice days make for a boring "weather show" as they like to call it. Give them something out of the ordinary - even a few early flakes - and they can whip out all those neat graphics. If Shelby Scott hadn't retired you just know Channel 4 would have her doing a standup with in Scituate with the wind whipping her hair and flakes flying around her. Maybe MSNBC wil have Michelle Kosinski do a standup.
Posted by Unknown at 6:23 PM No comments:

Who am I rooting for? 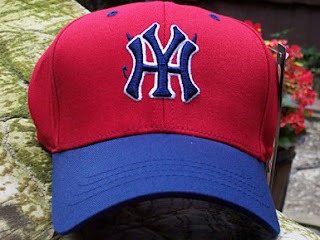 Following the "Papelbomb" on Sunday...
A buddy asked me who I'm rooting for now. "Obviously you wanted the Red Sox to win the World Series, but now who are you voting for?"

Of course I would like the Red Sox to win the World Series, but that's actually not my first choice.

Ball game over. Thuuuh...Yyyaaankeeees....lloooose!!
1966 was the final year of the streak. That was the year that the Yankees finished in.....(drum roll, please)....last place. In those 18 seasons a New York team (present or former) won the World Series 14 times. Half of those 18 were Yankees wins. Can you imagine the thrill when 1967 happened? Not only were there no Yankees or other former New York team involved, but the Red Sox actually got there...facing St. Louis.

The Phillies are my first choice.
Philly has a really nice ballpark, and the city has a lot of-lot of character. They boo Santa and cheer bad landings at the airport. The Phils are the defending champions. Only five teams other than the Yankees have won back-to-back championships: The Blue Jays (92 and 93), the Reds (75 and 76), the A's (72,73,74), the Red Sox (15 and 16) and, believe it or not, the Cubs (1907 and 1908). The Phillies won game 1 against the Red Sox in 1915, then proceeded to go 65 years before winning another postseason game. Also, I have a Phillies jacket that I got when working in Philly in 2004. One more thing: before moving to Philadelphia in 1882, the team played in Worcester. That's where my daughter Caitlin was born. They were the Worcester Ruby Legs.

Go Phils
Posted by Unknown at 9:57 PM No comments: 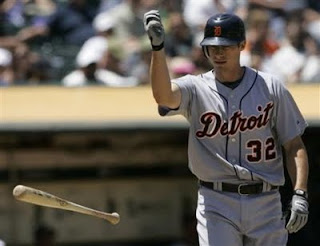 Where is the game?
I'm watching the Tigers-Twins playoff game on my computer. If it's on TV I can't find it. In the 11th inning Detroit puts in a pinch runner named....Don Kelley. Okay, he spells it Kelly. But I can pretend. Don Kelley winds up scoring the go-ahead run in the 10th. The Twins, however, answer in the bottom of the 10th, then Don Kelley winds up on 3rd in the 11th, bases loaded, full count. A ball four to Rayburn would force in the go-ahead run for Detroit in the person of Don Kelley. Except if Rayburn swings at ball four and misses. Which he does. So it's on to the 12th, where the Twins just won it. 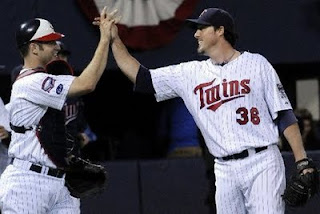 Who was I rooting for?
Whoever would have the better chance of beating the Yankees, of course. The Twins faced the Yankees only 7 times this year in the regular season, going 0 for 7. That's right, uh-huh. 0 for 4 at Yankee Stadium, 0 for 2 in the don't-knock-it-down-quite-yet Metrodome.
Twins in the playoffs
Well, the Angels usually beat the Red Sox in the regular season season series, but always lose in the playoffs (12 of the last 13 games, and all four postseason series). Maybe the Twins fortune will change over the next few days. This is Minnesota's fifth time in the playoffs this decade. Their track record isn't great - they lost in the second round to Anaheim in 2002, lost in the first round to New York in 2003 and 2004, and lost in the first round to Oakland in 2006.
I have my fingers and eyes crossed.
Posted by Unknown at 9:35 PM No comments: