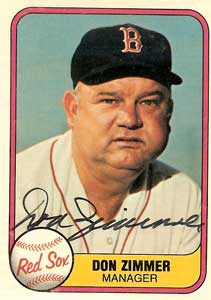 What Zim meant to Boston
A couple of days ago Don Zimmer passed away at the age of 83. He was a guy who, in his own words, "Never earned a paycheck that wasn't from baseball." It's a great baseball story, going back to when he got married at home plate in 1951, was supposed to take over from Pee Wee Reese as shortstop for the Brooklyn Dodgers but was beaned twice in the days before they had batting helmets, wound up with screws in his head and was never the player he might have been.

His nickname was Popeye.
Maybe in New York. Bob Ryan of The Boston Globe wrote that the nickname came from his oversized forearms. I disagree. It's because he looks like Popeye. The big jowls, the squinty look. And the Popeye thing is not what he's remembered for in Boston. He's remembered as the manager who's team blew a 14-game over the Yankees and lost the division in that one-game Bucky "Bleeping" Dent playoff, greatly disappointing a championship-starved Red Sox Nation (60 years and counting at that point). Everyone had figured this finally was the year, but noooo.

He supposedly hated pitchers.
Probably because of the beanings - and wound up trading one of the Red Sox best-ever lefties, Bill Lee, because Lee called him a gerbil. And that's his nickname with Boston fans. When Zimmer called Lee to tell him that he'd gotten even for the gerbil thing by trading him to the Montreal Expos, Lee replied, "Did you get anyone in return, or was I a freebie?" Who'd they get when Lee was traded? Papi. Not Big Papi, but Stan Papi who never amounted to anything. In 1979 Stan Papi batted .188 as a Sox infielder. That same year Bill Lee, a pitcher who had only played for the Red Sox and therefore had never batted in the majors, hit .216 for the Expos. (Can you name any current Red Sox hitters who'd love to be hitting as high as .216? Ross? Nava? Drew? Bradley?)

What about the Pedro thing?
In the 2003 ALCS between the Red Sox and Yankees there was a bench-clearing brawl (really??) at Fenway. Pedro Martinez barely hit Karim Garcia and the benches were warned. Subsequently, Roger Clemens threw over the head of Manny Ramirez and, although the pitch wasn't actually all that close, Manny took great umbrage, resulting in the bench-clearing. Zimmer, then the Yankees bench coach, ran toward Pedro Martinez. Reports described the encounter as Pedro shoving a 72-year-old coach to the ground, much like Manny pushing 65-year-old traveling secretary Jack McCormack to the clubhouse floor over not getting enough tickets for his friends in 2008. Pedro was subsequently fined. What actually happened - I was there in Section 29 and had an excellent vantage point - was in mid-scrum Zimmer bolted out of the Yankee dugout and charged at Pedro like he was a bullfighter. Pedro ducked a little to his right and deflected the oncoming Zimmer, who then lost his balance and went down. That's what actually happened.

All in all...
It is a great baseball story. 66 years playing for five teams, managing four, coaching for seven and as a senior advisor for one. The marriage at home plate in 1951 lasted until his death. And anytime you see a player - even Little Leaguers or youth Girls Softball players - get plunked but are saved from injury by their helmet - you can thank Don Zimmer.

Posted by Unknown at 5:47 PM No comments:

The Big Bang doesn't do it for me.
The Red Sox are on the road and they have a night off. In Detroit, no less. What could be more fun than that? There's no game to watch, the game on the Cape that I was supposed to umpire was rained out, so I was sitting here watching "Jeopardy" and surprising myself at how many answers I knew. Including Final Jeopardy, where I would have bet it all and won. No, I didn't remember to say, "What is..." before yelling out the answers. But no one is paying me for correct answers, so I don't have to follow the format.

What's next?
Next on CBS is "The Big Bang." I know a number of people who are very intelligent and who's opinion I respect who have raved about this show. This was my third attempt at understanding their appreciation.

I don't get it.
Actually, I do get it, but just don't think it's funny. Or clever.

Perhaps I'm spoiled. I rarely watch network series on ABC (sometimes "The Middle" or "Modern Family"), NBC or CBS. No, even though I live in Wellesley, Massachusetts, I'm not a PBS snob. "Downton Abbey" is as far as I go on PBS. I enjoy HBO series like "Silicon Valley, "Veep" and "True Detective" and of course, "Game of Thrones." (Have you seen the bar crowd reaction videos to last week's Trial by Combat scene? They're great.) Loved "The Sopranos" and "Entourage" and enjoyed "Curb Your Enthusiasm." Showtime initially hooked me with "Dexter" and then "Homeland" (but I didn't like it when Brody was hanged) and I like "House of Lies," "Nurse Jackie" and even "Shameless." Both "House of Cards" and "Orange is the New Black" on Netflix are binge-worthy. AMC's "Breaking Bad" was as good as any series I've ever watched. Ever. On F/X I'm a big fan of "Justified." (Every time I see a black Lincoln limo I think to myself, "That's a Raylan Givens car.")

But what about the Big Bang?
It's just too stupid. Nothing's funny. The writers are trying way too hard and failing. I hate the laugh track. Every time anyone says anything they pot up the laugh track and it's just plain annoying. I reminds me of a neighborhood fireworks display on the 4th of July (my favorite day of the year) when you're waiting for a grand finale that never happens.

But at least I tried.
As I said, people who's opinion I respect rave about the show, but I find it painful to sit through an episode.

Posted by Unknown at 8:56 PM No comments: