Except for the 5-1/2 New England states, nobody would be rooting for the Sox. But I'm flummoxed. For whom do I root? 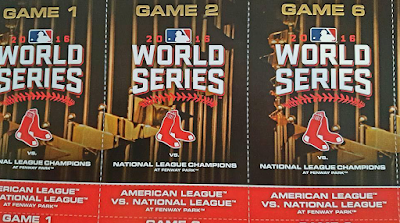 The Cubs, as pretty much everyone knows, have gone 108 years without winning, and have not even been to the World Series since 1945. 71 years. Most of us, including yours truly, were not even a twinkle in our father's eye. What you never hear anyone mention is that the Cubs had been in the World Series three straight years, 1906-1908, losing to the crosstown and much less popular White Sox in 6 games in 1906, then they were back-to-back winners in 1907 and 1908, defeating the Tigers both times. A sweep in 1907 and a win in 5 games in 1908. Both wins came at Navin Field, also known as Briggs Stadium and Tiger Stadium, which opened in 1912, the same year as Fenway Park. The Cubs have never clinched at home. When the Red Sox clinched at Fenway Park in 2013 for the first time in 95 years it was a record that will never be broken.

Then came the Cubs drought.

Bad, but not as bad.

I guess. Not as bad in World Series play, but probably worse overall. The Cleveland Indians, meanwhile, beat the Brooklyn Robins, now the LA Dodgers, in a 7-game series in 1920. Flash forward to 1948, when we almost had a Boston vs. Boston World Series. It could have been the Comm Ave Series. The Indians beat the Red Sox in a one-game AL playoff. Braves Field (which is still there, now known as BU's Nickerson Field) was the site of the Indians win in a 6-game Series. Someone at BU dug up a piece of the field on Monday and sent it to Cleveland for spirit.

Cleveland then went about 40 years without finishing within 14 games of 1st place. They made the movie "Major League" about moving the Indians out of Cleveland. Their old ballpark held 70,000 but only about 7,000 would show up. You'd see a home run shot and there was nobody in the bleachers except some guy reading a newspaper and the guy at the back row in center field pounding the drum.

They had a brand new ballpark, "The Jake" (Jacobs Field, now known as Progressive Field), and a sellout crowd (a requirement by the city for funding "The Jake") for four years. 1995 was a rematch of the Indians-Braves 1948 series. Competing Native American mascots. This time the Braves won, Atlanta's only win ever.

...the Indians lost again, when Jose Mesa blew it in Game 7 and the Florida Marlins, in only their 5th season, won it all. Cleveland is 2 and 3 in World Series play.

Lots of Boston alum involved. Are we rooting for...Theo or Tito? Theo hired Tito for the 2004 season. Plus points for both. Theo signed Curt Schilling. He was the biggest difference in the 2004 win. Plus point for Theo, but also for Tito, because Schilling really liked working for Tito in Philly and that was a factor in signing him.

The Red Sox were in 1st place on September 1st, 2011 and failed to make the playoffs. Theo fled to Chicago, but Tito was pushed out. I give a plus point to Tito on that. Ben Cherington was a Theo guy, and he signed Bobby Valentine, Pablo Sandoval and Hanley Ramirez. Not sure whom you blame for those bad signings, but it's not Tito.

Dan Shaughnessey's "Curse of the Bambino" made a lot of sense, and it was a big deal when it was finally broken in 2004. But the billygoat curse at Wrigley? A lame attempt at copying the Babe Ruth curse. Not even in the same ballpark.

So, as I watched Game 1 and start to watch Game 2, I'm still undecided. On one side you've got Theo, Lester, Lackey, Ross and Rizzo. On the other you have Tito, Napoli, Miller and Coco. It's a good thing the Red Sox are not in the Series this year.

Either way, a long drought for someone ends.

Posted by Unknown at 6:49 PM No comments: