Worst to first in four weeks

This afternoon Magic 106.7 will be playing the special mashup of "Dirty Water" by the Standells - complete with the crowd cheering and singing along - for two reasons.

One, the Bruins won Game 7 last night and move on to the Stanley Cup Finals. 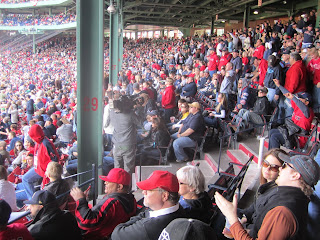 Two, the Red Sox beat the Tigers again last night, and on the left coast the Mariners beat the Yankees. Meaning that the Sox, who began the season with the worst record in baseball and were in last place on May 1st, are now in first place.  How do you like them big apples?  We'll also be playing our exclusive Fenway crowd mashup of "Sweet Caroline."  A couple of years ago Tom Werner heard it on the air and called me asking for a copy. That was pretty cool.

My daughter, who lives in New York and works at MTV Networks (but is definitely not a Yankee fan) just got a promotion.  Looking out the window on Bass River, I see that Memorial Day Weekend is sunny on Cape Cod and all is well..
Posted by Unknown at 9:57 AM No comments: 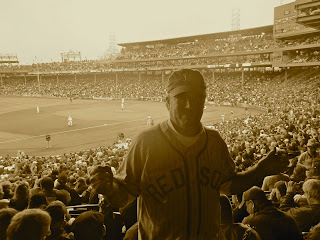 This weekend the Chicago Cubs made their first appearance at Fenway Park since 9/11/1918.

They made a pretty big deal out of it, which is a good thing.  That hasn't always been the case.  Back in 2003 the Red Sox went to Pittsburgh to face the Pirates in Interleague play.  It was the first time the two teams had met since the 1903 World Series.  That's 100 years without playing each other, and it hardly got a mention.  Same thing when the Giants played the Sox for the first time since the 1912 World Series.  All the talk was about Barry Bonds and his steroids.

This was very different.  On Friday night. the Red Sox proceeded to pound the Cubs, 15-5.  On Saturday night they planned Throwback Night, with both teams wearing 1918 uniforms.  I have a replica 1918 Red Sox shirt that I've had for at least 15 years, so I wore it on Saturday.  It still fits (although a year ago it wouldn't have), but being a gray road shirt it looks nothing like what the Sox wore.  The home white uniforms were just that:  white.  White cap (no B on it), white shirt (no lettering at all), white pants, high red socks.

There were tons of Cubs fans there, none of whom acted like Yankee fans.  They all seemed to be friendly and having a fun time.  They were treated nicely by Sox fans, just as my daughter Kara and I were when we went to see the Sox play the Cubbies at Wrigley back in 2005.  That's the Midwest attitude for you.

Friday night, Dennis Eckersley, one of only four Hall-of-Famers who played for both the Red Sox and Cubs, threw out the first pitch.  (Note that it wasn't his performance with either team that got Eck into the Hall).   On Saturday it was Babe Ruth's daughter.  That can't be right.  Must have been his granddaughter.

The whole throwback thing was fun for the most part.  One thing they did was interesting, but weird.  At the beginning of the 3rd inning they announced that the clocks were being turned back to 1918.  No videos on the new HD jumbotrons, no Carl Beane announcing the batters.  The scoreboards were turned off except for the big manually-operated one in the left field wall.  No music except from the organ, and there wasn't much of that.  The only announcements were from guys on top of the dugouts using megaphones.  It was cute for a batter or two, but if you weren't scoring the game on a scorecard you'd have no idea what was going on.  No idea of the count or who was at bat.  Was that an infield hit or an error? 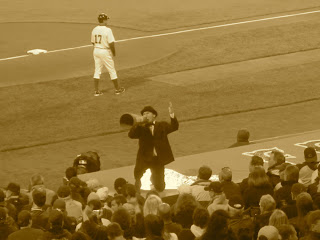 The megaphone idea, as I said, was cute, but didn't work.  You could tell the guy was yelling into it, but you could barely make out anything he said.  I might have caught the middle syllable of Jacoby at one point, but that was it.  Did they really do that back during games back in 1918?  The crowd would have been smaller, but they also must have talked to each other a lot less.  Nick Cafardo wrote in today's Boston Globe that he liked the idea that you could have a "quiet" experience that would let you concentrate on the game itself, but he's a writer.  I'm a fan, and I disagree.  I, and everyone sitting near me in Section 29, groaned a little when the megaphone guys came back out for the 4th inning.  We were hoping it would be a one-inning diversion.  In the 4th, David Oritz hit his 300th home run as a member of the Red Sox and no one in the ballpark knew it.  They all knew he hit one into the Monster Seats,  but not that it was momentous number.
Things went back to normal for the 5th, and the crowd cheered.  The music, the videos, the PA announcements and all that make the experience more entertaining.
My daughter was going to a friend's birthday party, so we had to leave after the 7th.  As I got in the car, the top of the 8th was under way,  and Dave O'Brien was saying that if the Sox were to hold on to the 3-1 lead they'd be in 1st place.  Pretty amazing after the 0 and 6, 2 and 12 start.  It was not to be.  The Red Sox pitching and defense turned into the Bad News Bears and they gave up 8 runs on four hits, three walks and three errors.  It was actually worse than that.  The Bad New Bears would have had the standard Little League 6-run-per-inning limit.  It was the worst Red Sox inning I can remember, and I've seen a lot of them.  But I was in the car at that point.  When all the fun stuff happened, i was in the park, sitting in Section 29.
Posted by Unknown at 7:20 PM No comments: 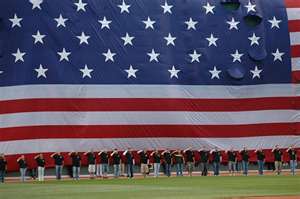 Monday night, May 2nd was quite a night at Fenway. Close to midnight the night before we learned that Osama Bin Laden had been killed by Navy Seals. The Monday night game was the first public gathering in Boston since the news broke, and the display of patriotism was truly remarkable.

Prior to the National Anthem they dropped that huge American flag over the left field wall - the one they use for Opening Day and the World Series. There was a moment of silence for all those who perished in the 9/11 attacks and the years of subsequent war. Soldiers who had returned from five tours of duty were honored, and the crowd chanted, "U-S-A...U-S-A...U-S-A!!!!" They did it again after "God Bless America" (usually only sung during Sunday games) during the 7th inning stretch.

It was also a fun game. The Sox opened the season with the worst record in the majors. Now, a month later, there are 9 teams that have a worse record than the Red Sox. And they're tied for 4th place in the AL East - meaning they're not last. Tonight, if they win and Toronto loses, the Sox will have sole possession of 4th place. We're #4, we're #4!

Simultaneously, the Bruins played Game 2 of their playoff series in Philadelphia.  The crowd at Fenway was kept up to speed with the score posted on the hand-operated left-field scoreboard and highlights were shown on the huge new HD video screen. Many fans were wearing the color clash of red-and-blue Sox shirts and black-and-gold B's hats. The B's won in OT just as Okajima recorded the final out in the 9th for the Red Sox win.

A fun night all around, but the most remarkable thing was the overwhelming display of patriotism. The biggest I've seen in almost a decade.

Tuesday  night update: Not only did the Red Sox win again, but both Toronto and Baltimore lost.   So Boston is now in sole possession of 3rd place, only four games out, and there are 10 teams with worse records.
Posted by Unknown at 12:39 PM 1 comment: