A Perfect Game - in Relief

Five years ago this month I almost saw a perfect game. It was in Oakland. Curt Schilling had not allowed a baserunner until the 6th when a guy reached on a Lugo error. It was a room-service grounder and Lugo should have easily made the play. But he didn't. We got to the bottom of the 9th, two outs, no hitter still in place, and Shannon Stewart singles. Schilling retires the next guy and it's a one-hit shutout. But if Lugo had made that play, Stewart would not have gotten up in the 9th and it would have been not only a no-hitter, but a Perfect Game. But there's better Perfect Game story. 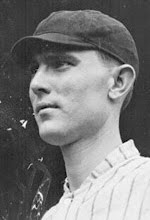 It was 95 years ago today that the strangest Perfect Game in Major League Baseball history took place. It was game one of a double-header at Fenway Park, with the Red Sox facing the Washington Senators (they became the Minnesota Twins in 1961).

The starting pitcher for Boston was Babe Ruth. Leading off for the Senators was Ray Morgan. Ruth wound up walking Morgan on four pitches. When home plate umpire Brick Owens (is that where the name Brick in "The Middle" came from?) made the ball four call, Ruth was so agitated that he called Owens "the most foul name imaginable" according to the Boston Globe writeup. (Just this week the Supreme Court overturned the "fleeting expletives" fines that the FCC had leveled against ABC and Fox for F-bombs that aired during award shows, and given that today you can say "sucks" and "WTF?" on network tv during family viewing time, one has to wonder what was the most foul name imaginable back in 1917?)

Back to the game. Owens ejected Ruth, who was not known for taking this sort of thing well. Ruth then marched up to home plate and took a swing at the umpire. That got him hauled off the field and he was hit with a $100 fine and a ten-game suspension. The catcher, Pinch Thomas (there were a lot of colorful ballplayer names back then) was also ejected.

So, Sox pitcher Ernie Shore comes trotting in from the bullpen as a reliever. It's the top of the first, one on, nobody out. Morgan decides to try and steal second, but Ernie Shore senses this, throws to first and picks him off. Shore then proceeds to retire the next 26 Senators in a row, resulting in a 4-0 win that was a Perfect Game in relief.

It stayed in the record books that way for years until someone decided that, because Morgan originally reached 1st base on Ruth's walk, it was a no-hitter but not a perfect game. Wondering what ever happened to Ernie Shore? His Sox career met the same fate as Babe Ruth. He was sold to the Yankees by owner Harry Frazee.

Posted by Unknown at 1:11 PM No comments:

No, I'm not talking about how one year ago the Red Sox were in first place and now they're in last place. I'm talking about the Marlins, who are in town for a three-game series this week.

Last week the Red Sox went from Fenway, the oldest ballpark, to Miami, to play the newly-renamed Miami Marlins in their brand new downtown ballpark, on the site of the old Orange Bowl. I was there with my daughters, Caitlin and Kara, for game #1 at Marlins Park.

A year ago this week I went to Miami with Kara, and we took in a Florida Marlins-Arizona Diamondbacks game at Sun Life Financial Field, where the Miami Dolphins also play.

They say that a picture is worth a thousand words, so check this out. Here's a shot I took a year ago: 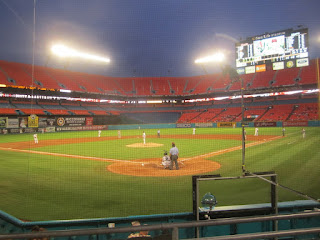 This was actually during a game. I've been to high school games with more fans.

And here's a shot from last week: 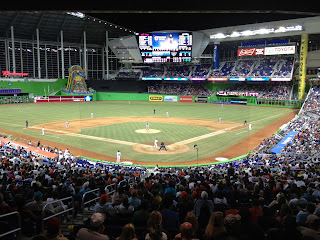 At Sun Life Financial Field (previously known as Land Shark Stadium, Pro Player Stadium, Dolphins Stadium and Joe Robbie Stadium) there were so few fans it was ridiculous. You could easily hear someone talking who was sitting ten sections away. The handful of people walking through the stadium could look at a model of the new stadium that would open in 2012, and I wondered where the money was coming from. Certainly not from ticket sales.

Flash forward to 2012. Marlins Park is easily the most colorful Major League ballpark I've ever seen, and I've been to games at 39 of them. The Cuban influence is everywhere, from the new logo to the salsa band playing outside the park. The fans are really into it. It has a one-picece retractable roof similar to the one in Seattle but obviously for a different reason. In left field there's a huge glass wall that gives you a great view of the Miami skyline. On a long shot it looks as good as it does when you're watching CSI: Miami or Dexter. About 30,000 were on hand (that would be some ten times what we saw a year ago) and many were wearing shirts and hats with the new Miami 5-color logo. To be sure, there were quite a few Red Sox fans as well. At one point they showed clips from two nights earlier when the Miami Heat knocked the Celtics out of the playoffs. The crowd erupted in a roar. I marked that down as excessive taunting.

The PA announcer did not yuck when introducing Marlins players. The scoreboard did say,"Make some noise" a few times, but they didn't use a graphic that shows you how to clap. Like almost all ballparks they had a race for fans to bet on in the middle of the 5th inning. In Milwaukee it's sausage v. hot dog v. brat. In DC it's George Washington v. Abraham Lincoln v. Teddy Roosevelt (Teddy always loses). Miami went with shark v. sea dragon v. octopus v. stone crab. They actually had the second-best wave I've ever seen. In every ballpark I've been to, except for Fenway, the wave is nonexistant or completely lame.

The scoreboard is huge and the diamondvision picture is shaped like a rectangle attached to a rhombus.

I've had the opportunity to see a game in the final season of an old ballpark and the first season of a new ballpark in six different cities (Baltimore, DC, Dallas, New York, Minneapolis and now Miami). A new park is always an upgrade, but Miami was the best turnaround I've seen.

Posted by Unknown at 9:27 AM No comments: