There are some historically great baseball names, like old-time pitchers Burleigh Grimes, Rollie Fingers, Three Finger Brown and Smokey Joe Wood. And bad ones like Eric Plunk and Bob Walk.

LOOKING AT TODAY'S 40-MAN ROSTERS, HERE ARE SOME GOOD PITCHER NAMES:
Doug Fister (Mariners)
Jamey Wright (Mariners) Yes, he's a righty.
Aaron Laffey (Indians) Bring him in when the game gets out of hand.
Tony Sipp (Indians) Trouble is, the Indians never get to sip the champagne.
Kevin Slowey (Twins) Throws junkballs.
Zack Greinke. It's just a good name.
Mark Buerhle (White Sox) Sounds like a big guy.
Frank Francisco (Rangers) I keep wondering if his full name is Francisco Francisco.
John Maine (Mets). Only player named after a state.
Ryan Rowland-Smith (Mariners). Only MLB player ever with a hyphenated name.
Mark Lowe (Rangers) ...and just a little outside.
Ubaldo Jiminez (Rockies). Have you seen him with his hat off?
Huston Street (Rockies). Is that where he was born?
Mike Leake (Reds). When you gotta go...
Laynce Nix (Reds), Drew Stubbs (Reds) Both sound like shaving mistakes.
Fernando Abad (Astros). A bad pitcher?
Grant Balfour (Rays). It's BAL-four, but it looks like like ball four.
David Riske (Brewers) Risky business? He was briefly with the Red Sox.
Brian Bannister (Royals). He should slide.
Evan Meek (Pirates). As long as he's in Pittsburgh he won't be inheriting the earth.
Antonio Bastardo (Phillies). Clearly born out of wedlock. Did his Mom think people wouldn't know?
Tim Lincecum (Giants). I just like it. I saw him play in the Cape Cod League.

GOOD NAMES THAT AREN'T PITCHERS
Buster Posey (Giants). Also saw him play in the Cape Cod League. The PA guy on the Cape always called him "Busta"
Grady Sizemore (Indians) Scott Sizemore (Tigers) Both big guys.
Clete Thomas (Tigers) It's right up there with Spike Owen and Trot Nixon.
Ryan Budde (Angels) Hey, buddy!
Will Rhymes (Tigers). 3 and 2, the big one due.
Taylor Teagarden (Rangers) Remember Teegarden & Van Winkle's "God, Love and Rock & Roll" in 1970? No?
Taylor Tankersley (Marlins). It sounds like Dennis Eckersley when he had a bad game.
Casey Blake (Dodgers) In the poem "Casey at the Bat" the guy who's at bat right before Casey strikes out is named Blake.
Reggie Willits (Angels) Will its the bottom of the 9th.
Chipper Jones (Braves) Should have been a golfer.
Chin Lung Hu (Dodgers). Only MLB player with a name that has two body parts. He's a shortstop, but with a name like that he should play first base.
Prince Fielder (Brewers). He looks like a DH but could never be one with a name like that.
Craig Counsell (Brewers). He should have played on the Patriots along with Ty Law and Lawyer Milloy.
Chase Utley (Phillies). Great player with a great name.
Lastings Milledge (Pirates). Sounds like a Vice Presidential candidate in 1856.
Assdrubal Cabrera (Indians). It's a boy! Let's name him Assdrubal!
Yorvit Torrealba (Padres). Why Yorvit? Because Asdrubel was already taken.
(Okay, they're both from Venezuela, but Yorvit is actually older than Assdrubal, and Asdrubal really has only one s. But it's funnier with two.)
Matt Stairs (Padres) Is he up?
Coco Crisp (A's) Obvious.
Milton Bradley (Mariners). A real gamer. Also a jerk. Go directly to jail. Do not pass Go.
Evan Longoria (Rays). How can you not think of Eva Longoria?
Ty Wigginton (Orioles). I just like the name.
Don Kelly (Tigers). He spells it the wrong way, but how can I not like it?

SHOULD BE A PITCHER:
Justin Smoak (Mariners).
Randy Winn (Cardinals)

ROLLS OFF THE TONGUE NICELY:
Humberto Quintero (Astros)
Placido Polanco (Tigers).
Rod Barajas (Mets). Give the the R in his last name a really good rrrroll.

SPELLING BEE NAMES:
Jarrod Saltalamacchia (Rangers) A 14-letter name that barely fits on his shirt.
Mark Rzepczynski (Blue Jays) An 11-letter last name with only two and a half vowels.

PRETTY FUNNY NAME IF YOU DON'T KNOW HOW TO SAY IT:
Kosuko Fukudome (Cubs).
Posted by Unknown at 5:59 PM No comments: 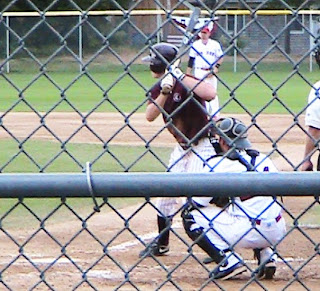 It's the Monday of the All-Star break. There are only two days in the year when there is no game action in any of the professional sports and this is one of them.

Except on the Cape
I'm on vacation on the Cape, and as I do every year I've caught a couple of Cape League games. At Red Wilson Field in Yarmouth the Yarmouth-Dennis Red Sox host the Cotuit Kettleers. Up to bat steps the Cotuit right fielder, #18, one Michael Yastrzemski. My daughter Kara says something about the coincidence of seeing a name like that in a ball game. I responded that it wasn't any coincidence. Michael Yastrzemski goes to Vanderbilt and comes from North Andover, MA. This is probably the grandson of Yaz. A woman in front of me hears this and confirms it.

The MLB strike
When you mention "the baseball strike" people usually think of the one that canceled the 1994 World Series. But the strike before that, in 1981, cut a big hole in the middle of the season. During that strike I went to a Cape League game in Harwich. The Y-D Red Sox were playing the Harwich Mariners, and one of the players on the Red Sox was Michael Yastrzemski, who is the father of the Michael Yastrzemski I just saw playing for Cotuit and the son of Carl Yastrzemski, who was still an active player with the Boston Red Sox. Carl, who had free time because of the strike, was at the game in Harwich and saw his son Mike hit a home run.

Flash forward 29 years
So here I am watching a third generation of Yaz at bat. He's a lefty, by the way, batting .211 with no homers and 2 RBI's. I'm guessing that his pro baseball career will be more like his father's than his grandfather's, but it's interesting to watch him at bat.

Other noteable names
Playing first base for Cotuit is Caleb Bushyhead. Seriously. I tried to peer into the dugout to see what he looked like when he took off his helmet, but couldn't get a good look. Maybe if he makes it to the majors and plays for the Rockies he can take a pickoff throw from their star pitcher Ubaldo Jiminez, who's starting for the NL in the All-Star game ("Ubaldo throws over to Bushyhead, but the runner is back safe"). On the Red Sox we have Matt Hamlet, who goes to BC and comes from a little town in Virginia. Never mind about BC, think about the little town part. The shortstop is Joe Panik (OMG! Don't tell me he's up again! What are we gonna do???) Also Matt Rush, who's trying to get into a fraternity at Oral Roberts, and always swings at the first pitch. They've got a big kid named Poppe. 6'6", 220. The closer for Yarmouth-Dennis is appropriately named Michael Goodnight. He's lights-out.

There's a guy named Scott Snodgress from Stanford. I wondered if he might be related (great-great-great-nephew or something) to the player on the New York Giants who dropped a fly ball in Game 7 of the 1912 World Series, allowing the Red Sox to win the Series. But that guy was Snodgrass, not Snodgress. There's a guy named Jordan Leyland who I thought might be related to Detroit Tigers' manager Jim Leyland. I Googled it and saw a headline that said, "Tigers draft Jim Leyland's son." But it's not Jordan, it's Patrick.

So enjoy the shot of Yaz at bat in 2010. Do you think he has a similar stance?

Posted by Unknown at 5:26 PM No comments: