Wo-oh, On the Radio 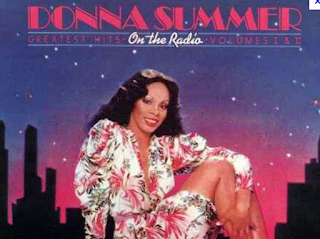 Another star no longer shines, and again at much too young an age. Donna Summer succumbed to cancer yesterday. She was only 63, which is the new 42.

#1: When her first album came out in 1975 I was working at WGTR in Natick, MA. The station was owned by John Garabedian, who still today, at the age of 70, hosts a weekly Top 40 show called "Open House Party" that is heard on stations coast-to-coast on Saturday night. Side one of the Donna Summer album was one song, "Love to Love You Baby." 17 minutes of Donna sounding like she's getting busy like no one ever has before or will in the future and goes out of her mind 8 times. John decides that we should add the song, and asked me if I could edit it down to a reasonable length but leave in enough moaning to make it interesting. I do, and we have a 3:42 version with one set of fireworks. The song becomes a huge hit, and WGTR, as the first station anywhere to add it, is awarded the Gold Record.

#2: When Donna winds up becoming a star, my mother mentions over dinner one night that she had been Donna's math teacher at the Jeremiah Burke High School in the Dorchester section of Boston. In the same class was a young woman named Valerie Holiday. Valerie wound up as lead singer of the Three Degrees, who had a #1 song in 1974, "When Will I See You Again?" What are the odds of two people in the same math class in high school both having #1 songs?

#3: When my wife Kathy and I started dating, we were both working at a radio station on Cape Cod. She had just been on a trip to California and visited Donner Summit, which sounds like Donna Summer if you have a wicked bad Boston accent. Not that either of us does. Anyway, our song was "On the Radio" by Donna Summer.

Posted by Unknown at 6:25 PM No comments:

The Voice is Silenced 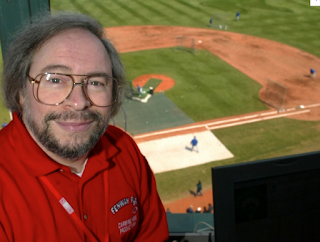 The name Carlton Beane sounds like a wild pitcher in the latest John Grisham book, but our friend Carl Beane was the PA voice of Fenway Park.  He died of a heart attack while driving on Wednesday afternoon.  He was only 59.  Last night, upon the Red Sox return to Fenway, the Public Address system was silenced.  (As were the Red Sox bats, but that's another story.)

Carl worked at a radio station in the central part of the Commonwealth, WARE in Ware.  One of only two radio stations in America where the call letters and the city of license are an exact match.  Naturally you want to know what the other one is:  it's WACO in Waco, TX.  Since 2003, the year I got my season tickets at Fenway as a Father's Day present (thanks,  Kathy), Carl has been the Voice of Fenway.

In addition to the gift of a booming voice that echoed off the Monster and the beams supporting the upper deck, Carl knew just how to play it.  When you go to a game in other cities (I've been to games at 38 Major League ballparks) you are almost always treated to a PA voice that sounds bored to tears when announcing the visiting players, but when the home team is up the fans are treated to what is known in the radio business as yucking.  If you really go overboard it's called puking.  "And now, batting for YOOOUUUUR Ariiizzzoooooona Diiiiamondbacks, the shortstop, number 6,STEEEEE-veeeennn DREEEEEWWW!!!!"  Carl never did that.

He also recorded an announcement for me that I used to have as a ring tone. "Your attention ladies and gentlemen, now batting for the Red Sox, the left fielder...#13...Don...Kelley."   I've been going through old backup drives the last couple of days trying to find it.  No luck.
Posted by Unknown at 3:20 PM 3 comments: