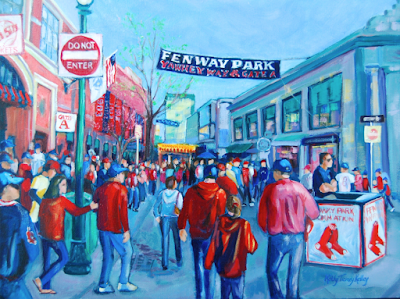 Always one of the best days of the year. The sun is shining, there's new grass on the field. Put me in, Coach. Hope Springs Eternal. The award-winning painting above, "Hope Springs," was done by my wife, Kathy, two years ago. That was when Hope Sprung for 2013 following a last place finish in 2012. So let's do it again.

The Red Sox wrap up in Philadelphia tonight.

Philly is where they boo Santa Claus and cheer bad landings at the airport. But I had a good time when I worked there. I'm watching the game and I haven't heard Don Orsillo or Jerry Remy mention this, but there's a 1915 banner flying. The Phillies are also wearing a throwback 1915 hat. 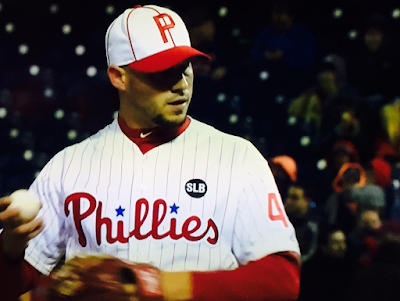 The Phillies won the NL pennant that year.

And faced the Red Sox in the World Series. Philadelphia won Game 1, then lost four in a row. It wound up as a back-to-back Boston-over-Philly Championship. The year before, 1914, saw the AL Philadelphia Athletics (now, two moves later, they're the Oakland Athletics) lose to the NL Boston Braves (now, two moves later, they're the Atlanta Braves) in 5 games. The Phillies wouldn't return to the World Series until 1950, when they were swept by the Yankees.

After 98 years playing in Philly (the team had moved there from Worcester, MA in 1882) with a record of 1 and 8 in World Series play with no championships, Philadelphia faced the Kansas City Royals and won it in 6 games. They lost to the Toronto Blue Jays in 1993 (that was the Joe Carter walk-off series), beat the Rays in 2008 and lost to the Yankees in 2009. No winning seasons since then.

So why the throwback hats?

Why not? It's 100 years. I'm just surprised that no one is mentioning it.

This didn't make it on NESN last night, but they had someone dressed up like Woodrow Wilson, who was President in 1915, throw out the first pitch.

Posted by Unknown at 9:26 PM No comments: