No more collisions at home

MLB is banning collisions at home.
As people head home slowly on a snowy December night…hoping to avoid those whoops-type sliding collisions (remember to steer into the skid) we're looking at another type of collision. Runner crashing into catcher at home plate hoping to knock the ball loose and score. Catcher trying to hang on to ball, get an out and not get concussed.

Taking a cue from the NFL.
The NFL made a settlement with retired players who suffered numerous concussions during their playing days and are feeling the effects, often devastating, years later. It has certainly been an issue in the NHL as well. Matt Cooke of the Pittsburgh Penguins effectively ending the career of Boston Bruins center Marc Savard when he concussed him with a whack in the head being one of the foremost examples. Sean Thornton's current 15-game suspension being another.

Now it's baseball's turn.
Red Sox backup catcher David Ross was concussed twice during the 2013 Championship Season. He was able to return and and take over the starting catcher job for the last three games of the World Series (following Jarrod Saltalamacchia's .188 batting postseason average and ill-advised throw to 3rd that cost the Sox a loss in Game 3. And the lack of a qualifying offer when he filed for free agency).

San Francisco Giants catcher Buster Posey, a Rookie of the Year and NL Batting Champion missed an entire season when his leg was broken in a home plate collision. Did that affect the Giants fortunes? Let's look at the numbers. Buster was also the catcher for the Yarmouth-Dennis Red Sox of the Cape Cod League when they were champions in both 2006 and 2007 (the PA announcer always called him "Busta"). In his rookie year the Giants won the World Series for the first time since 1954 when they were the New York Giants (in case you've wondered why you hear people refer to the New York Football Giants, that's why. The baseball Giants preceded the football Giants by decades before moving to SF in 1958). He missed the entire 2011 season, but was back in 2012 and the Giants won it all again.

It's not a new rule.
Girls Fastpitch Softball has had the rule for several years. The catcher cannot block the plate awaiting a throw. She can stand just to the side of the plate and make a sweep tag for the out.

All three were safe.
But the plays were close, and no one got concussed. It's a good rule and I applaud MLB for adopting it. Let's hope the Players' Association doesn't try to block it at the plate.

Posted by Unknown at 7:38 PM No comments: 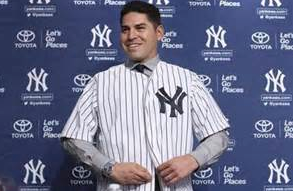 Ellsbury Will Not Come to Fenway Wearing Pinstripes

Jacoby at Fenway wearing pinstripes? Won't happen.
Ever since the news broke on Monday night that Jacoby Ellsbury signed a $153 million contract with the Yankees every sports writer, TV reporter, Sports Talk radio host has said something about April 22nd, when "Ellsbury will show up at Fenway Park wearing pinstripes." Maria Stephanos on Fox 25, both Walt Perkins and Tom Cuddy on WBZ, Mut, Michael Holley and Mike Salk on WEEI, Rob Bradford on weei.com, Tony Massarotti on 98.5 The Sports Hub. The latest is Peter Abraham in today's Boston Globe. Have you seen, heard or read anything about the story that didn't include that line? 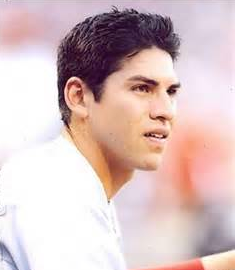 Why it won't happen.
You're thinking that's because he'll be on the disabled list? Maybe he will be, but that's not the reason he won't be wearing pinstripes. And I've heard no talk of MLB voiding the contract on some technicality. The reason it won't happen is the same reason that it didn't happen with Babe Ruth, Luis Tiant, Wade Boggs, Roger Clemens, Johnny Damon or Kevin Youkilis.

One more thing.
Ells won't get his #2 because Jeter has it. When Jeter retires, #2 will retire with him.

No-name trivia tidbit.
Question: What is the only major pro sporting event you can go to…anywhere in the world…where none of the players has a name on the back of the shirt?

Answer: When the Red Sox and Yankees play at Fenway Park. The Red Sox only have names on the uni on the road. The Yankees never have names. (The obnoxious assumption is that if you're a Yankee everyone everywhere knows who you are).

If you do want a chance to boo Ellsbury in pinstripes…
…you'll have to go to the new Yankee Stadium. A spectacular ballpark. But buyer beware - especially if you boo him - the place is loaded with Yankee fans.