Tek hangs up his catcher's gear 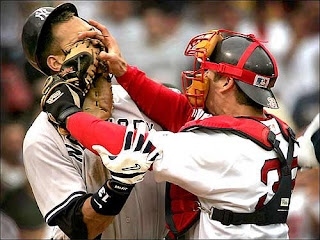 Jason Varitek was asked to come to spring training as a non-roster invitee.  The Red Sox already have Jarrod Saltalomacchia (the longest name in professional sports-three letters longer than Ben Roethlesberger) as the #1 receiver.  They also have Ryan Lavarnway, who came up from Pawtucket last fall and showed impressive power - substantially more than Jarrod or Jason over the last couple of years. Plus, the Sox signed former Pawtucket catcher Kelly Shoppach as a third catcher.  Shoppach was part of the trade to get Coco Crisp a few years ago, and wound up in Tampa Bay last year.  So, with three catchers on the roster, where would Tek play?

Jason probably could have found a backup gig with another team, but he said that he could not picture himself wearing anything but a Red Sox uniform.  No doubt he discussed the idea with Dwight Evans.

Dewey spent 19 seasons with the Red Sox, from 1972-1990.  He played in more games than any Sox player in history except for Yaz.  In one game in 1990 he hit three home runs against the Orioles.  So when he was released after the 1990 season, the Orioles signed him for one year.

He got his #24, and they paid him a million dollars.  Despite that, he has said it was the worst decision he ever made.  "In Baltimore, I was just another old outfielder.  No one remembered the great catch in the 1975 World Series, or the home runs in the 1986 World Series, or anything else that happened in Boston.  The biggest response I ever got as an Oriole was the night in June that I returned to Fenway and got an amazing standing ovation.  As I stepped into the batter's box someone hung a huge sign over the center field wall that said, 'Dewey-thanks for 19 great years.' "

So Tek decided not to do that.  He was a hero in Boston and will go out that way.  His most memorable moment was getting in the face of A Rod - literally - in that July 2004 game that turned the season around.  It's one of the most purchased Red Sox action shots ever (see above), but Jason doesn't like to be remembered that way and never signs copies of that photo.

He holds the Major League record for catching no-hitters.  He was calling the pitches when Hideo Nomo. Derek Lowe, Clay Buchholtz and John Lester threw no-no's.  He almost had a 5th.  I was in Oakland the day that Curt Schilling just missed having a perfect game.  No hits, no walks.  The only baserunner was due to a Lugo error.  In the bottom of the 9th with two outs Curt shook off the sign from Tek and Shannon Stewart singled.  The next batter was out and it went down as a 1-0 one-hitter.  Schilling, who would never blame anyone else if something didn't work out, blamed himself for shaking off Varitek.  Really he should have blamed Lugo.  Without that error it would have been a perfect game.

Varitek also holds the record for most games caught be any Red Sox catcher, and most games played by anyone who spent their entire career with the Red Sox but didn't play left field.  Okay, that may be stretching things.

Jason Varitek spent two summers playing in the Cape Cod League for Hyannis.  He is the only player in the history of baseball to play in the Little League World Series, the college World Series, and the real World Series.  And the Olympics.

The Red Sox got Jason at the trading deadline in 1997.  In one of the most lopsided deals ever, an ineffective closer named Heathcliff Slocum was sent to Seattle in exchange for Derek Lowe and minor-leaguer Jason Varitek.  Ever wonder what happened to Heathcliff?  He spent a year-and-a-half with the Mariners, half a year with the Orioles, a year-and-a-half with the Cardinals, and year with the Padres.  Career record of 28 and 37, ERA of 4.31.  His last season was 2000.

Jason Varitek was a player, a team leader, and a good guy who would sit in his front yard in Waban and hand out candy to neighborhood kids on Halloween.  I hope the Red Sox hire him as a coach.

Tim Wakefield hangs up his spikes

Not surprising, but a little disappointing.  Of all the Red Sox pitchers I've seen - and it's a long list - Tim Wakefield is at the top.  I've seen him more than anyone.  (Bob Stanley is #2 on that list.)

A knuckleballer is only supposed to win half of his games.  Sometimes the knuckler dances well, sometimes it doesn't.  Tim easily exceeded the expectation.  He was a starter, a spot starter, a middle reliever, a bullpen guy and a closer.  19 seasons in the majors, 17 with the Red Sox, starting in 1995.   He pitched over 3200 innings.  Struck out twice as many as he walked.

In the 2004 playoffs against the Yankees he came on in relief in the crucial Game 5.  It went 14 innings and lasted until 2AM, and Tim had to face Derek Jeter, Jason Giambi, A-Rod, Hidecki Matsui, Jorge Paada, et al. for three innings.  He gave up only one hit and was the winning pitcher.  He is the only knuckleballer ever to start a World Series game.

How many times did Tim Wakefield go out there and pitch well, but get no support?  Losing 1-0, or leaving with a lead that was subsequently blown by the bullpen?

He wound up with 200 wins, 186 of them with the Red Sox.  Only eight short of breaking the all-time Red Sox record of 194, shared by Roger Clemens and Cy Young.   He struck out well over 2000 for the Red Sox, not that far from the Clemens mark of 2590, and double what Cy Young did.  An amazing record for a knuckleballer.

Cy Young was too along ago to really know, and we know all too much about Roger.  Tim Wakefield, however, was well known as a good guy.  Always said the right thing in an interview.  Did a ton of community work.  Gave us many quality innings.  We'll miss him.