As the Playoffs begin...

For whom are we rooting?
First, let's think of the possibilities. We could have the Dodgers and Angels in the LA Series. Maybe The I-5 Series (the word The gets a capital letter because in LA you always include it before the number of a freeway). The Angels won their only Series in 2002. The Dodgers last won in 1988 the year Kirk Gibson hit his fist-pumping, limping walkoff. That was the moment that Dennis Eckersley, the pitcher who gave up that home run, coined the term walkoff. It originally referred not to the hitter but to the pitcher who threw the pitch. As Eck said, "At that point there's nothing for you to do but walk off."

We could have an All-Missouri Series (a Misseries?) between the Cardinals and the Royals. A 1985 redux. The Cardinals got screwed by a bad call at 1st base that turned the series in KC's favor. That was KC's only win ever.

The A's and Giants could meet in a Bay Area Series. A repeat of the Earthquake Series of 1989. They could call it the Wild West Series, as both teams are Wild Card playoff entries, but that name was used in 2002 when the Angels and Giants, both Wild Card winners, faced each other in the Classic. That could happen again this year. Maybe it would be Wild West II, or Return to the Wild West.

My favorite, as noted in an earlier blog, would be the Orioles and the Nationals. The Parkway Series. Someone on ABC News called the possibility a Beltway Series, and both Baltimore and Washington have Beltways (I-695 and I-495 respectively), but they don't connect and neither actually goes near a ballpark. However, the B-W Parkway, Route 295, goes directly from Camden Yards past BWI Airport to the Anacostia River in DC, which abuts Nationals Park. The O's haven't won since 1983, and Washington has waited 90 years for a World Series championship.

We could have the Orioles and Pirates for the 3rd time. They faced each other in 1971 and 1979, with the Pirates winning both. When I was Program Director at Mix 106.5 in Baltimore we were warned to never play "We Are Family" because it was the Pirates theme song in 1979.

We could have the Orioles and the Dodgers in a redux of 1966, when the Orioles won the first championship in franchise history by defeating the defending champion Dodgers. LA ace Sandy Koufax refused to pitch during the Jewish holidays.

Let's see...Detroit and St. Louis? A repeat of 1968. The Cardinals did what the Red Sox couldn't do the year before...solve Bob Gibson.

A's and Royals tonight.
Jon Lester v. James Shields. Naturally, I'm rooting for Lester, but this is a one-and-done and if the A's lose it might increase the Red Sox chances of re-signing Lester for 2015. I'd like that.

Posted by Unknown at 8:30 PM No comments: 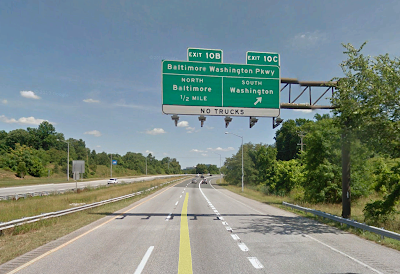 Traffic on the Parkway could be busier than usual in October.
Last night the Baltimore Orioles, my second-favorite team, clinched the AL East for the first time since 1997. That year the Cleveland Indians knocked them off in the ALCS and subsequently lost to the upstart Florida Marlins, who wound up winning the World Series in only their fifth year of play. That was the second-fastest franchise to win the World Series. Four years later they lost that honor to the Arizona Diamondbacks who won it all in their fourth year.

Okay you're wondering which team won it the fastest, right?
Why, it was the current (but not for long) defending World Champions from Boston. The Red Sox,, then known as the Americans, won the very first World Series in only their third year of play, in 1903.

But back to Balmer.
The last time they clinched the East was 1997, as noted above. The year before that they won the AL Wild Card and advanced to the ALCS. That was the year they got screwed by a kid in New York named Jeffrey Maier who reached over the short right field fence at old Yankee Stadium and interfered with a fly ball that was hit by Derek Jeter and most likely could have been caught by right fielder Tony Tarasco. It was the 8th inning and the Orioles were leading 4-3. The ball deflected into the stands and was ruled a home run rather than fan interference. The Orioles wound up losing the game and the series.

And that had been a 15-year wait.
Had Baltimore won that ALCS (or the one the next year) and then gone on to win the World Series they would have been the only team to win it all in the 60's, 70's, 80's and 90's. Their previous win was back in 1983 when they knocked off the Phillies. People were calling it the I-95 Series as it's only a 90-minute drive up the highway.

Meanwhile, a half-hour south on I-95...
Or on the B-W Parkway, which is a much nicer drive, we have the Washington Nationals who also just clinched their division last tonight. The last time a team from Washington DC won the pennant was...(drum roll)...1933. The Senators lost the series that year to the New York Giants four games to one. The last time (and only time) a team from DC has won the World Series was in 1924 when the Senators beat those same Giants. That's 90 years ago. Way worse than the Red Sox 86-year drought and even the White Sox 88-year drought that no one paid any attention to. That old expression "Washington...first in war, first in peace, last in the American League" wasn't born from nothing.

Yeah, but they didn't have a team for a big chunk of that time.
True. The original Washington Senators became the Minnesota Twins in 1961 and were replaced by a new Washington Senators who were worse than the originals. They gave up and moved to Texas in 1972 and became the Rangers. The Nationals of today were the Montreal Expos from 1969-2004 when they moved to DC. So you can count either the team that left DC without baseball...or the one that brought it back...but either way there were no championships connected to our nation's capital. So it's 90 years and counting.

A Parkway Series?
That would be a good name for a Baltimore-Washington series. The Baltimore-Washington Parkway (no trucks allowed), also known as Route 295, actually goes almost directly from Camden Yards at the Inner Harbor right past BWI Airport to Nationals Park on the Anacostia River.

2013 was so much fun...
...The Red Sox going worst-to-first and winning the World Series at home...it will last me through 2015, when they might go worst-to-first a second time. So this year I'm hoping for a Parkway Series and I'd be happy with either team winning, but my heart would be with the O's.

Posted by Unknown at 1:16 PM No comments: