A funny thing on Saturday 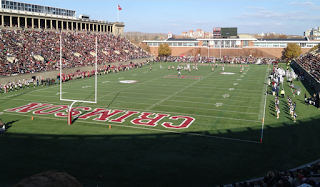 On Saturday I was at what is frequently called "The Game"...meaning the 129th playing of the Harvard-Yale game at the oldest football stadium in America.

Did you know that the length and width of a standard football field is based on the dimensions of Harvard Stadium? The actual rules of football were written up by Harvard and Yale back in 1875.

During the 3rd quarter they posted scores of other games on the Jumbotron, including "Western Carolina 49, Alabama 0." I looked around and could see many faces with a "what???" expression. I could imagine people calling their bookies to put some decent coin on Western Carolina winning the game.

About 5 minutes later the scores were re-posted with the 49 points properly credited to the other Crimson team. I imagined all those folks who had just called their bookie hitting redial to cancel the bet, but not getting a connection because the cell towers were overloaded.

Posted by Unknown at 9:19 PM No comments:

A Boone or two for the election

Thought this was funny. Today, the day before the election, we got a couple of robo calls. One was for Elizabeth Warren, Democratic candidate for the US Senate, the other was for incumbent US Senator Scott Brown. All the polls show it's a tight race.

Pat Boone? That's who the Brown campaign believes will knock people off the fence and re-elect Scott? Really? Pat, who is 78, is famous for several pop songs in the late 50's and early 60's, like "Love Letters in the Sand" (#1 for 7 straight weeks) and for a squeaky-clean image. I think he did TV spots for milk, and this was way before the "Got Milk?" campaign.

Then I flip on the TV, which I rarely see during the day unless it's on CNBC, and there's an ad for Lifestyle Lift, a company that does facelift surgery. The spokesperson is Debby Boone, Pat's daughter. In the background you hear a snippet of Debby singing. 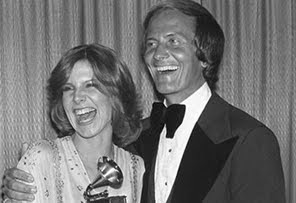 For those who are too young to know, in the summer of 1977 Debby Boone had her one and only hit, "You Light Up My Life." It went to the top of the Billboard chart and stayed at #1 for ten straight weeks. When you have a ballad that stays at #1 for that long every station winds up playing it. Over and over. The result was that the American public got so sick of the song that they never ever ever wanted to hear it again. That's why you never ever hear it today, even on an oldies station.

So in the TV ad for Lifestyle Lift, they play a snippet of "You Light Up My Life" but they don't use the hook of the song. Made me wonder whether the director was too young to know it wasn't the hook of the song, or old enough to know that nobody wants to hear that hook ever and decided to use a different three seconds of the song so that the advertiser would be happy but viewers wouldn't be too turned off.

And there's another little tidbit to add. While Debby's song was being pounded on the radio in the summer of '77 she and her dad Pat did a TV spot for a product called Acne Statin which would miraculously get rid of your acne. Just rub it on and zits disappear. Trouble was, Acne Statin didn't work, and there was a successful Class Action suit against not just the makers of Acne Statin but against Debby and Pat because they used their celebrity to convince people that they had used the product and it worked when in reality they had not used it and it didn't work anyway. Acne Statin was never heard from again. Neither were the Boones until this week.

But wait, there's more. The makers of Lifestyle Lift are currently under investigation by the Florida Attorney General's office.