Two centaurs walk into a bar and get into a fight 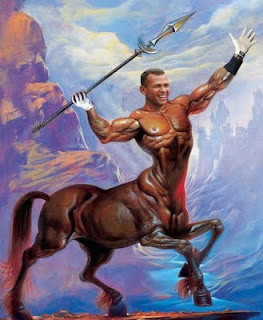 This will tie together...promise!
So tonight I was at a Wellesley Club dinner, and the guest speaker was Mike Dowling, sportscaster for Channel 5 in Boston. The last time I saw him at a non-sports event was as MC of the Wellesley Spelling Bee. It's an annual bee where teams of three from companies, community organizations, college alumni groups, neighborhoods or schools compete. It's a fundraiser for the Wellesley Education Fund. A good cause, a fun night.

We be in the bee
A couple of years ago I got together with my two brothers, Hugh and Peter, and we formed a team for the spelling bee. We were The Kelley Brothers. Pretty clever name. Both of them went to Harvard. I didn't, but I won a Hunnewell School spelling bee in 5th grade and I'm an excellent parallel parker.

We almost won
We were indeed a formidable team, making it to the final round. It had gone from 40 teams down to the final two: some guys from a law firm in town, and the Kelley Brothers. We went through seven ridiculous words that no one would ever use, and both teams were still standing. Then Mike Dowling gave us the next word...centauromacchia. Okay, Mike - use it in a a sentence. "A centaur is a mythical half-man, half-horse. When two of them are having a fight - In Latin - it's a centauromacchia." Really. Well, we got it wrong. To be honest, it was not I who blew it. One of my very smart brothers thought that "macchia" had only one c. So we lost, but at least it was on a word that would never come up in conversation.

Until the 2009 World Series
While the media was fawning all over A Rod during the World Series you may have heard some talk about his centaurs. A Rod has two of them painted on the wall above his bed, facing each other in ready-to-attack position. The heads on both of the centaurs are likenesses of A Rod. Seriously. Word of this got out when Kate Hudson let it spill that she thought they were a bit much and he should lose them.

So do you think A Rod knows how to spell centauromacchia?
I'm guessing no. It could be that he calls himself A because can't remember how to spell Alex.

Exonerating footnote
If you look up centauromacchia in dictionary.com it isn't there.
Posted by Unknown at 9:43 PM No comments:


It's Wednesday night.
I was wearing my Phillies warmup jacket and watching Game 6 of the 2009 World Series, but when it got to be 7-1 Yankees I gave up. I have no need to watch the Yankees jump all over themselves at the end of the game. Seen it too many times before. I think of those poor folks in Milwaukee. When I went to a game at Miller Park in 2006 people talked about how the Brew Crew had been there in 1982. But lost. Their one trip to the Fall Classic. How about the Cleveland Indians fans? "Remember when we won it in 1948?"

So I flipped to CSI
They had an autopsy scene that grossed my wife out, so I hit the off button on the clicka. Then I decided, for no particular reason, to look up Dick in Baseball Almanac.

Actually, there was a reason.
I rarely do anything for no reason. Here's this one. On many occasions I have used a joke I stole from an old Dick Van Dyke Show. Dick, who played Rob on the show, and his wife Laura, played by Mary Tyler Moore, have a son named Robby. Robby wants to know why his middle name is Rosebud. It's goofy. They flash back to the day the name decision was made. It has nothing to do with the sled in "Citizen Kane." All the relatives are there, each with his or her own idea of the perfect moniker. One says it should be Robert, after the Dad. Another wants Oscar. Aunt Somebody pitches for Sam. Uncle Somebody likes Edward - a strong name. He keeps spelling it out. E-D-W-A-R-D. Other offerings are Benjamin, Ulysses and David. They finally decide to name the kid Robby, but for a middle name they take the first letter of each suggestion and come up with Rosebud.

So where's the joke?
When the Sam suggestion is voiced, Uncle Somebody says, "That's no good. Every Tom, Dick and Harry is named Sam." (My friend Mike Kinosian, Special Fetaures editor for Inside Radio, tipped me off that Samuel Goldwyn came up with the line.) I thought it was funny, and as I mentioned above, I have used the line over the years on every possible occasion.

But who is actually named Dick these days?
In Baseball Almanac there are lots of Dicks. Dick Radatz, Dick Trazewski, Dick Drago, Dick Stuart, Dick Schofield, Dick Groat, Dick Tidwell, Dick Bartell, Dick Bertel, Dick Pole, Dick Allen, Dick Howser, Dick McAuliffe, Dick Gernert, and many more. But today? I looked at the 40-man rosters of all 30 teams. That's 1200 players. There's a guy named Don Kelly who spells his name wrong. There's one guy named Tom. Another guy is named Jhonny (was that intentional, or a typo on the birth certificate?). There are lots of Justins. There's Jason and Jayson. There's John and Jon, Jered and Jarrod, Clay and Cla, Curt and Kurt, Eric and Erik, Sean, Shawn and Chone, Trevor and Trever, Vladimir and Wladimir, Zach and Zack. There's Asdrubel, Anibal, Esmerling, Huston, Jai, Jhulys, Ubaldo, Yadier, Yashuhiko, Yonder, Yorman, Yordany, Yorvani, Yorvit, Yuniesky and Yusmeiro. But there isn't even one major league player named Dick. Or, for that matter, Harry.