Good News and a Note of Caution 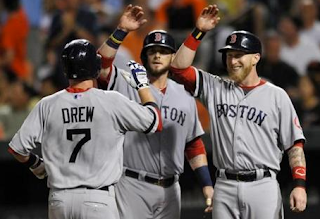 After the 9th inning 3-run homer from Stephen Drew on Wednesday night the Red Sox had a total of 70 wins. No team in Major League Baseball had more, and 70 wins is more then the Sox had for the entire season in 2012. And we're still in the single digits of August. A year ago at this time they had only 55 wins and were in 4th place 11 games out.

The Note of Caution

Go back another year. On this date in 2011 the Red Sox had 72 wins and were in 1st place by 2-1/2 games. Remember, the big chicken-and-beer collapse didn't start until September.

Let's look at some big years of the past on this date:

1990 Won the AL East but were swept by the A's in the playoffs - that was when Roger Clemens was tossed for mouthing "vaccuum" (so he claimed) at the umpire. 60 wins, 1st place by 2 games.

Ended the season tied for 1st with Cleveland. Lost a one-game playoff. If they'd won, it would have been a Boston Red Sox v. Boston Braves World Series. The Braves also lost. 4th place, 3 games out.

Worse off much more frequently over the years, but right now they're better off than in any World Series year since 1946. And much much better off than anyone predicted.

Posted by Unknown at 6:00 PM No comments: