The Great Northeast Power Blackout. Knew it in a minute. 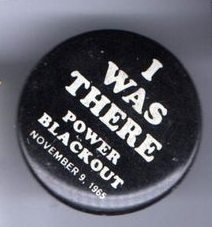 It was 50 years ago today

At 5:17PM on November 9, 1965 the lights went out all over New England, New York and Ontario. A lot of people suspecred the Russians were behind it. A story in today's Boston Globe says that hardly anyone knew how widespread it was until the next morning.

But I knew within a minute

Because of the radio. My aunt was having a glaucoma procedure done at Mass Eye & Ear (pronounced "the Eye-uh-Knee-uh") and was staying with us. We needed to pick up her prescription. Just after 5 my mother drove to Wellesley Square and parked at a meter in front of Clement Drug. I hopped out of the passenger seat and went in to buy it.

As the pharmacist was in the middle of ringing it up on one of those newfangled Monroe-Sweda registers that had spinning numbers - they replaced the old school National Cash Register ones that actually made the ca-ching sound - the lights went out and the numbers stopped spinning. The pharmacist said, "Ooh. I guess I didn't pay the electric bill" and took out his wallet to make change.

Then we both looked out the window and saw that all of the lights in Wellesley Square were out. "Ooh. Guess it's not just me." Being a polite teenager, I thanked him, walked out and hopped in the passenger seat of my mother's car.

What's the first thing a teenager in 1965 would do getting into a car? Turn on the radio. Our 1960 red Ford Galaxie 500 had, like most cars at the time, an AM radio with 5 buttons. The middle one was set to my favorite station, WBZ, "W-Beatle-Z, The Boss Sound of Boss-Town" and the first thing I heard was Jefferson Kaye saying that due to the power outage in Boston they were operating on an emergency generator. So this goes all the way into town.

My second favorite station was WMEX, 1510, The Home of the Good Guys. Being a radio nut even then, I guessed that Wimmex was too cheap to have an emergency generator, so I hit the 5th button and I was right. WMEX was off the air. AM radio bounces off the ionosphere, so in a situation like this an adjacent channel would come in. Which is what happened. WKBW, 1520 in Buffalo, came in clearly. Right away I heard the announcer, Dan Neavreth, say that because of the power outage across the city of Buffalo they were operating on an emergency generator. All of this happened in less than a minute.

It lasted until mid-morning

No power all night, no power when we woke up. But school wasn't canceled. With no power they had no way to cancel it. Power finally came back on around 10:30AM.

And for years to come people would ask...

where were you when the lights went out? But it's hard to beat my knew-it-in-a-minute story...thanks to the radio.

Posted by Unknown at 4:33 PM No comments:

A Big Redemption for Spenser's Ace

Three years ago Ace Atkins got a D.

But he pulled his grade up to at least an A-. Some background: In the summer of 1981 I started reading Spenser mysteries by Robert B. Parker. I read all 39 of them, as well as all of Parker's Jesse Stone series (the Paradise, MA Police Chief character played on TV by Tom Selleck), all of the Sunny Randall series and a few other Parker novels. That comes to about two a year for over 30 years. Safe to say I was a fan of his work.

When Parker died in 2010 I thought that would be it.

But no. There was another Spenser book all set for release that summer, and another one posthumously released the next year. And Then Parker's wife Joan Parker wanted to keep the Spenser series going, so she sold the rights to Ace Atkins, a writer from Troy, Alabama who was a big Spenser fan. It probably didn't hurt that "Ace" was also Joan's nickname for Robert B.

I read the first one, Lullaby, and gave it a scathing review.

Which it deserved. Click here if you missed it. The story itself was pretty good, but his Boston stuff was absolutely horrible. I wasn't looking for mistakes, I was just trying to enjoy a new Spenser book. But the mistakes kept jumping off the pages and I started keeping track. I wound up with about 80 of them without breaking a sweat. Going the wrong way on well-known one-way streets, incorrect location references, screwing up characters that any Spenser fan would know, talking like a southerner, not a Bostonian. You name it. I was so disappointed I gave him one star on amazon.com and a D in my blog and decided to give up on Spenser.

Then he wrote a second one, Wonderland.

You can go on amazon.com and get a free preview of the first 25 pages or so. So I decided to at least give it a try and see if he'd learned anything. How far would I get before running into a screwup that screamed Alabama and not Boston? Not very far. I got to page one, paragraph two, when Spenser, who is in Revere chatting with Henry Cimoli and getting some fried clams from the takeout window at Kelly's. Okay so far. But as Spenser and Henry talk, he reaches into his bucket of fried clams to eat one. Bucket? You don't get fried clams in a bucket, but people from Troy, Alabama probably don't know that. In the interest of due diligence I went to the Kelly's web site, clicked on menu, then seafood, and read the choices for fried clams. Just what I expected. You can get a clam roll or a clam plate. No buckets. Kelly's is not a KFC. Ace had clearly not learned anything about Boston, so I logged out, didn't buy the book, and swore off of Spenser.

Then he wrote a third one, Cheap Shot.

My dentist and long-time friend Kevin Toomey saved the day for Ace. He had just returned from a trip to Italy and mentioned that on the flight he had just finished the latest Spenser and enjoyed it. He added that he knew I'd been greatly disappointed in the first Ace Atkins attempt at Spenser but thought I should give it a shot. It was late summer and I was missing my former summer ritual of reading a Spenser book on the beach, and I have always respected Kevin's opinion, so I downloaded both book #2 and #3.

I have no delusions about Ace Atkins having read my scathing review and taken it to heart, but in book #2, Wonderland, he still made mistakes: "I drove down Tremont and under the Mass Pike" (No, Ace - Tremont Street passes over the Pike. You should try it sometime. Or look at Google Earth.) "I reached into the sack of muffins from Dunkin' Donuts" (No, Ace - we don't have "sacks" here. We have paper bags.) "I was listening to jazz on WICN." (No you weren't. You're at home in Boston, and WICN is a low-power station from Worcester that doesn't even show up in the Boston Nielsen ratings. This is a repeated mistake from book #1.) But...the error count was way down...from 80-something to about 10. And the story line about the fight for the Boston casino license is very timely.

In Cheap Shot it was down to maybe two.

And again, very timely. The son of a Patriots player is kidnapped and Spenser is on the case, helped by Hawk and Zebulon Sixkill, the new sidekick introduced in the last book written by Parker. Very timely given the Aaron Hernandez and you-know-what-gate stories. And hardly any Boston mistakes. Yeah, he did say "sack" instead of "paper bag" again, but only once, and he does a ton of spot-on local references. The story line is really good. And an associate of mine, Jordan Rich, does a talk show on WBZ and had Ace on with him for an in-studio interview so we now know that Ace has actually seen some of the places he's writing about.

...and realized that there's already a fourth one called Kickback that came out in May. Now I'm remembering that there was a review in the Boston Globe by Thomas Farragher and he said the book was very good, but ended by saying that Ace made some mistakes, like referring to a Bruins match. Match? Does he think that the Bruins play soccer, or just not know anything about hockey? I forwarded Thomas a copy of my 2012 review and he responded that I paid closer attention to details than he did.

And there's a fifth one coming out next May.

It's called Slow Burn, which is perhaps what Ace Atkins did when he got slammed for completely whiffing on Boston in his first attempt. He wound up getting it 98% right, so kudos to Ace.