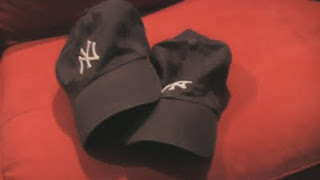 But necessary, in the interest of thorough research.
I had been to Red Sox-Yankees games at Fenway Park many times, dating back (believe it or not) to when Ted Williams and Mickey Mantle were playing. Seriously. I probably still had diapers on, but I was there. I've also been to Red Sox-Yankees games at both the old and the new Yankee Stadium. I had observed how fans of either team behave at both places, but I had never been in the position of looking like a Yankee fan at Fenway.

Size doesn't matter.
On Sunday night Kara and I went to the final regular season Red Sox-Yankees game at Fenway...wearing - gulp -Yankees caps. I tried five places before I found any. I wound up buying two at the small souvenir shop across the street from the Cask & Flagon. They had a gazillion Sox hats and two Yankee hats down on the bottom shelf. I cleared my throat and told the guy I wanted two Yankees caps, said that adjustable was fine and size didn't really matter. He handed me the caps and said, "Enjoy the game." No big deal. We put them on and headed across the crowded street to Gate E. One guy with a Yankee hat gave me thumbs up, and I heard a few guys singing, "Boo Yankees" but only for a moment and not very loudly. I bought a couple of the $2 scorebooks they sell on the sidewalk. The guy said, "Enjoy the game." The ticket taker booped the bar code on our tickets and said, "Enjoy the game." Part of the format, evidently. Note: nobody said that to us at Yankee Stadium.
We walked upstairs to the 3rd base pavilion, waited in line and got some food. Then waited in line and got a couple of beers. No one called us out, no one gave us hostile looks. We walked around some more, and then headed to our seats. Nothing. Josh Beckett delivered the first pitch of the game and Derek Jeter hit it into the bullpen. Numerous Yankee fans in the stands jumped up a cheered, and Kara said to me, "We should cheer so we're actually believable." I agreed, but told her I couldn't really do that. Just wearing the hat was giving me a headache and I started seeing floaters in front of my eyes.
On it went. At the end of the 5th, we got up and walked around some more to see if anything happened. We got two more beers and returned to our seats.

That's when we got outed.
By three different people. Nikki, who sometimes sits in seat #10 (we have 11 and 12) had been told by her boyfriend Jason, a Boston cop, that he'd spotted us wearing enemy headgear. When we got back to the seats Nikki turned and said, "Jason saw you guys walking around and said to me, "I'm sure that's Don and Kara, but they're wearing Yankees hats." A guy in the row behind me tapped me on the shoulder and said, "Okay, I have to ask. I've seen you and your daughter here scoring the game at least 29 times and you always have Red Sox hats on. What with the Yankees hats?" At that point the game was official, so we took off our Yankee caps and put on the Red Sox caps that Kara had hidden in her bag. Another guy in the row behind said, "Hey, did you guys change your hats?" I came clean, and told them that I have a blog and I'm doing research to see if Yankee fans at Fenway are treated the same way, better, or worse than Red Sox fans at Yankee Stadium.
The three measures.
Based on the three measures I use...1) how you treat visitors when they are guests in your house, 2) how you act when you're a guest in someone else's house, 3) how you act in general when the subject of the rivalry comes up at a party or dinner or something like that.
Extra, extra! Yankee fans are rude.
Yankee fans are noticeably more rude to visitors than Red Sox fans. Not a surprise, really. As "Yankee fans" at Fenway we endured no abuse whatsoever. It was like, okay there's a Yankee fan, but I don't care.
It's a different experience as Red Sox fans at Yankee Stadium.
Two years age the guys behind us were so bad we almost left, but they got thrown out. Not for for the disgusting stuff they were yelling, but for sneaking beers into the alcohol-free bleachers. This year we were in field level seats by the right field foul pole. Much more expensive, and presumably drawing a better class of clientele. These are big, comfortable padded seats. You get waitress service. You can order a Ketel One with lime. But you're still surrounded by Yankee fans. On the way in the security guy tried to take my camera away. New Yankee Stadium was the 35th major league ballpark where I've seen a game, and I've never had a camera problem before. Another Red Sox fan saw me and said, "Just go to a different gate."' I did, and it worked. Inside a guy said to me, "Hey, pal...Baws-tin ain't playin' here ta-night..they're over at Citi Field." Yuck, yuck. At the seats someone said, "Hey we got some chowda-heads." One guy passing Kara in the concourse said, "Why don't you just kill yourself?" It wasn't just us, of course. Several Red Sox fans scattered throughout the stadium were subjected to various degrees of razzing.
Who really sucks?
The "Yankees suck" chants at Fenway are fewer and farther between than in years past, but they're still there - usually when the Yankees score. At Yankee Stadium they chant "Boston sucks"...but their chants aren't as well orchestrated. More importantly, we chant about their team. They chant about our city. It's never "Red Sox suck," it's "Boston sucks." Outside the parks the t-shirts follow that pattern. In Boston you can get t-shirts saying funny but rude things about Jeter or A Rod. In New York the t-shirts just say "Buck Foston."

Yankee fans are more likely to be loud and obnoxious.
Too many of them wear loud, garish Yankee gear. When a Yankee player does something at Fenway you can count on a bunch of Yankee fans jumping up and making a big deal out of it. "CC...way to throw a strike!" or "Hip hip Hor-HAY" or "The Melk-man dee-livvers." This is more than cheering, it's loud. They stand up to do it, and stay standing way too long, blocking your view. It's probably intentional. Shut up and sit down.

At a party.
Yankee fans love to talk about The Babe, Bucky Dent, Bill Buckner and Aaron Boone. They love to flaunt their 26 World Championships and laugh about how we waited 86 years. Do they have a decent response if you point out that 18 of those 26 happened over 50 years ago? That 22 of those 26 were over 30 years ago? That the last three Yankee wins happened in the steroid era? No, they don't.

Ah, yes...the steroid era.
During the game in New York, one week after the news about David Ortiz broke, he got the expected hoots, although nothing worse than A Rod, Damon or Gary Sheffield have gotten at Fenway. One guy kept calling him "Big Popup." Of course, Ortiz did nothing to shut the guy up, popping up three times. He also grounded out and hit into an inning-ending double-play.

Here's what got me. When Ortiz would come up they'd hold up signs that said 1918, 2004*, 2007*. Really? You want to talk asterisks? Let's look at the last ten years...1998 through 2008, including the last two times the Yankees won the World Series and the two most recent Red Sox wins. On the Red Sox side of the ledger you've got Papi and Manny on the list. What about Yankees during that period? Got your pen ready? There's Ricky Bones, Rondell White, Jason Grimsley, Chuck Knoblauch, David Justice, Jose Canseco, Glenallen Hill, Jim Leyritz, Randy Velarde, Denny Neagle, Mike Stanton, Kevin Brown, Aaron Boone, Matt Lawton, Ron Villone, Gary Sheffield, Jason Giambi, Andy Pettitte, Roger Clemens and A Rod. That's 20-2, bad guys. 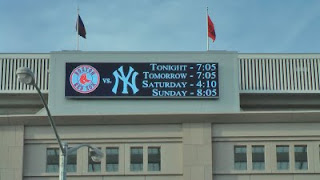 Yankee fans or Red Sox fans?
The Red Sox-Yankees matchups this year have been truly bizarre. The Sox won the first eight, sweeping the Yankees twice at Fenway and once in the Bronx. Then came the August bashing in New York, where the Yankees took four straight.
Think about for a second. A game at Fenway where New York was leading 6-0 and Boston winds up winning, 16-11. Another where the Yankees are leading with two outs in the 9th and Jason Bay ties it with a homer, then Youk hits a walkoff in the 11th. In New York two aces faced each other and gave up no runs. The game got to the 15th inning tied at 0-0. A couple of weeks later the Yankees pound the Red Sox, 20-11 at Fenway, only to get a return pounding the next day by the Red Sox, 14-1.
So which team has the worst fans? Meaning most obnoxious. Almost anyone in Boston will say that Yankee fans are more obnoxious. Any Yankee fan you may know will argue that Boston fans are much worse.
So where does the truth lie? I use three measures to determine the OF (obnoxious factor) of fans of either team. 1) How do you behave when you're a visitor in the other team's ballaprk? 2) How do you treat fans of the other team when they visit your ballpark? 3) How generally obnoxious are you when there's a discussion - wherever it may be...party, bar, whatever - of your team versus the other one?
A couple of weeks ago I went to the new Yankee Stadium with my two daughters. When I got back to work and discussed it, I said it was a really nice ballpark - and it is. Too bad it's full of obnoxious Yankee fans. One co-worker, a Yankee fan, said that Boston fans were much worse, and I wouldn't know because I've never seen what it's like to be a Yankee fan at Fenway. True, sort of. I've witnessed Yankee fans at Fenway many times, but to really get it I figure I have to walk the walk at least once.
Walk a mile in my hat.
Tomorrow, August 23rd, is the final regular season meeting at Fenway of the two teams. So far The Red Sox lead the season series, 9-5. The Sox are 7 and 1 at home, the Yankees are 4 and 2 at home. I'm going to the game with my daughter Kara, and we're going to wear Yankees hats. Let's see how we're treated compared to the way we were treated wearing Red Sox hats at Yankee Stadium. That's apples-to-apples.
I'll report either tomorrow night or Monday, depending on how late the game goes.

Posted by Unknown at 7:57 PM No comments:

My Top Ten Sitcom Characters of All Ttime 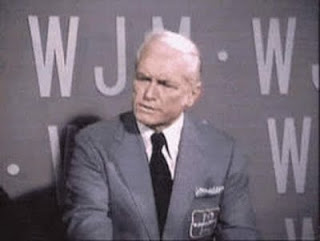 These are supporting roles, in chronological order.

1. Ed Norton, The Honeymooners. First, address the ball. "Hello, ball!"
2. Eddie Haskell, Leave It To Beaver. "My, that's a beautiful dress you have on, Mrs. Cleaver!"
3. Barney Fife, The Andy Griffith Show. Goober Pyle is a runner-up.
4. Ted Baxter, The Mary Tyler Moore Show. The ultimate anchorman.
5. Herb Tarlek, WKRP in Cincinnati. What you always imagined the Sales Manager would look like. Big Guy and Les Nessman are runners-up.
6. Norm, Cheers. "Norm!"
7. Wayne Arnold, The Wonder Years. The perfect jerk older brother.
8. George Costanza, Seinfeld. His parents are runners-up.
9. Joey Tribbiani, Friends. "How you doooin?"
10. Jake Harper, Two and a Half Men. You have to admit, the kid is funny.
Posted by Unknown at 11:13 PM 1 comment: