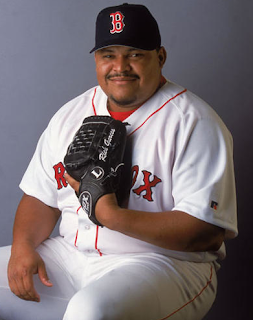 This is not Pablo Sandoval.

Remember who wore #34 for the Red Sox before Big Papi? It was Rich Garces, known as "El Guapo"...meaning The Handsome One. He and Kung Fu Panda are both from Venezuela and share a similar shape - not that tall and pretty fat for an athlete. Garces was an effective setup guy for six of his seven years with the Red Sox (1996-2002). That's also longer than the Sandoval contract.

In the picture above Garces was listed at a generous 215 lbs. Sandoval is currently listed at 246 lbs. Believe what you will. But both also have a likable manner and a catchy nickname. Pokey Reese, while not an impact player and not around that long, also enjoyed more popularity than his play deserved because of the nickname. Fans like personality as long as it's positive.

So what do we think about the signing?

Just like the winter following the horrible 2012 season, the Red Sox can't sit around and do nothing. Here's an impact 3rd baseman with fabulous postseason stats and three World Series rings, and after bouncing Yoouuuk out of the hot corner job Will Middlebrooks has spent the last two seasons hitting below the Mendoza line. A team can get away with one great defensive player who can't hit (National League teams do that in every game when the pitcher bats), but not with three or four, which is what we had in 2014. Sandoval has a decent glove and is surprisingly quick for his size. He'll wear number 48, his Giants number. In the View From Section 29 it's a good move. 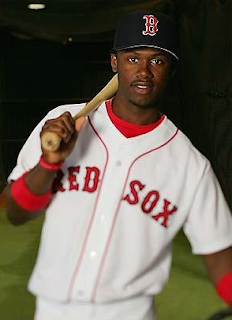 The shortstop of the future.

What name came to mind when you read that? Jose Iglesias? Xander Bogaerts? Or Hanley Ramirez? All three have worn that crown while playing for the Pawtucket Red Sox and no one has lived up to the advance billing. Ramirez, of course, lost it when he was traded to the Marlins for Josh Beckett with Mike Lowell thrown in for good measure. Do we really want to give up the Shortstop of the Future? He'll be Fenway-ready by next year.

In retrospect, of course, the trade was really for Lowell with Beckett thrown in. Hanley has been National League Rookie of the Year (2006) and Batting Champion (2009), but has also had some issues with attitude (early on) and injury (more recently - he's played fewer than 100 games every year since 2010). The Sox believe that the attitude issues are behind him and putting him in left field will make him less injury-prone. When healthy he is a force in the lineup. His Dodgers number was 13, and he'll get that from 3rd base coach Brian Butterfield. From Section 29 this also looks like a good move.

Why didn't they sign a pitcher or two instead?

They will. During Hot Stove time hitters typically are signed before pitchers are - especially candidates to be #1 or #2 starters. Uber-especially if they're clients of Scott Boras, who likes to wait a while and play a couple of teams against each other to drive up the price. Sure, it's annoying when you see photos of unsigned free agents and they show Jon Lester as an A. After all, he has started 252 Major League games: 241 of them for Boston, 11 for Oakland. His record is 110-63 for the Red Sox, 6-4 for the A's.

Sign Lester. Trade Cespedes and Will Middlebrooks to Philadelphia for Cole Hamels. Go ahead, throw in Bogaerts if you have to. As the #2 prospect in all of baseball just a year ago I was pretty disappointed with his performance. Not just the 138 strikeouts, but the .910 fielding % when he's playing 3rd (he was ranked 122nd among MLB 3rd baseman...remember there are only 30 starters). Still, he may still have enough up-side to float the Philly boat.

If they do that, who's at short?

Why not Brock Holt? He was a .300 hitter for most of the season..until he was concussed in a collision with Dustin Pedroia. He played through that and still finished up at .281. He was such a force they had to put him in the lineup, and his OBP was so good he hit lead-off for last five months of the season. He played every position but the battery, but his natural place is in the middle infield. Seriously, why is this a hard decision?

Let's just not forget that the Sox dumped all of their pitchers except Buchholz. Never mind the money or the fear of long-term deals. Get us a #1 and a #2.

Posted by Unknown at 6:55 PM No comments: