The Red Sox have a rotation.

With the signings yesterday of Rick Porcello, Wade Miley and Justin Masterson to add to incumbents Clay Buchholz and Joe Kelly there's a 5-man rotation with MLB experience. In the shadows we see Anthony Ranaudo, Brandon Workman and Matt Barnes, all of whom got a cup of coffee in the Big Show late in the 2014 lost season. Plus, we keep hearing about Henry Owens as the Ace of the Future. That's a pretty good front five and backup.

So what do they get for numbers?

Justin Masterson wore #63 as a Red Sox pitcher in 2008 and 2009, and also wore 63 playing for the Indians and Cardinals. A total of 240 games. Ranaudo has only worn 63 for 7 games, so let's give it to Justin and have Anthony pick something else.

Wade Miley has worn #36 for the Diamonbacks but Junichi Tazawa wore 63 for his first three years, taking the number when Masterson was traded, then flipped the digits and became #36. So Miley needs to do a search.

The choice is surprising. Let's just look at the top 50. David Ross is unsigned, so #3 may be available. Allen Craig is the 8th outfielder and had a horrible 2014, so #5 might be on the table (I'm surprised that Craig got a great number like 5). 7 was Jemile Weeks, who was just dispatched, so the Trot Nixon/JD Drew/Stephen Drew number is up for grabs. Jonathan Herrera is history, so someone can get 10. Will Middlebrooks has 16, but with Sandoval, who batted 80 points higher, signed to patrol the hot corner, who knows whether Will will still be around. Tory Lovullo has 17, but coaches' numbers are easy to grab - like Hanley taking 13 from Brian Butterfield.

No one will get 24, they are keeping that under wraps. Not for Manny, but for Dewey, who wore the number for 19 seasons. They won't give anyone Varitek's 33, Pedro's 45 or Wakefield's 49.

I know what you're thinking...

...Did he fire 6 shots or only 5? Sorry, I meant to say what number does Cole Hamels wear? Why, 35, which is on the available list.

Posted by Unknown at 9:57 PM No comments:

How Did Lester Wind Up Being a Cubbie? 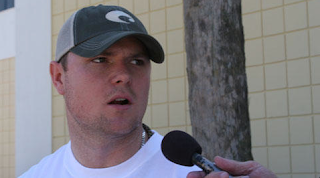 ...but it was probably a safe one to wear while he was weighing offers.

Why did the Cubs win the Lester sweepstakes?

First, we won't know if they actually did win until he gets to the sixth year of his huge deal. But, for the sake of discussion, let's assume he performs well for at least several more years. During his World Tour all the media shots of Lester showed him wearing an A's uniform. Even Oakland GM Billy Bean knew he was just getting a rental for a couple of months.

So why the charade?

Lester met with the Braves because he has a house just outside of Atlanta. Well, he also had a house in Newton, MA, right on the Charles River. Lester put that house on the market when he filed for free agency and the sale closed in November. Did that mean he really had no interest in coming back to Boston? Or that his winter home in Georgia, where his wife is from, is there, and he's there, so what's the harm in seeing what the Braves have to say for themselves? And if he got a gigantic contract, he could always buy a bigger house in a fabulous Boston suburb like Wellesley. (If you're interested, call Kathy Kelley at 781-710-1035 or go to WellesleyFineHomes.com).

What about San Francisco and LA?

Anytime you hear from the World Series Champion that they're interested in talking to you, you talk to them. Why not? How many teams have won three World Series in this century? Just two: the Giants and the Red Sox. The Giants even got Buster Posey to meet Lester and talk up how great things are at AT&T Park. Which they are.

Then there were the other rumors.

The Dodgers, with seemingly unlimited money, were interested, and everyone suspected the Yankees were ready to pounce. But Brer Rabbit, he lay low.

So what tipped the scale?

Last spring Jon Lester said he'd take a "hometown discount" if it made his family more comfortable. He also values friendship and loyalty. Red Sox brass took this way too much to heart and offered him a $70 million/4-year deal. This was a horrible misread of the market for a top starting pitcher, and Lester wound up with a six-year, 155 million dollar deal with a vesting option that would total $170 million. Let's do the math. The Cubs offer would be, um, 100 million more than the Red Sox deal. What about the friendship part? The Cubs have Theo Epstein and Jed Hoyer, who drafted Jon back in 2002. The Red Sox have John Farrell, who Lester likes a lot. And a fan base that he truly enjoys.

As one who has been to games at every Major League Ballpark (41 in all, including 11 that are gone or no longer used for baseball), I can state with authority that, while they're all great, no place has a crowd reaction that can come close to matching the Fenway Park experience. Including Wrigley.

Then there's the loyalty thing.

That $70 million offer last spring was ridiculously low, especially coming off a World Series win where Lester was 4-1 in the postseason. Really low offer, then they trade him to the A's. Back in the 50's the Yankees made a habit of getting rid of players by trading them to the A's. because they could. When Sox owner John Henry gave Lester a parking lot hug last July 31st as Lester was leaving for Oakland, Dan Shaughnessey of The Boston Globe (also owned by Henry) referred to it as a "Fredo, I know it was you-you broke my heart!" moment. He was right.

That was the biggie.

Lester never wanted to leave, but he was give a crappy offer because Carl Crawford and Adrian Gonzalez were overpaid and underperformed, then he was sent away to the A's because other people on the team couldn't perform. And we got Yoenis Cespedes in return, who is mentioned as trade bait on a daily basis. So basically, whoever we get for Cespedes will be what we got for Lester.

And the starting rotation is...

Is "Let's Make a Deal" still on the air?

If it is, I never watch it, but if Jon Lester winds up being the ace who brings a World Series Championship to the Cubs after a drought of at least 107 years...good for him.