My week at Red Sox Spring Training. The highs, the lows, the maybes. 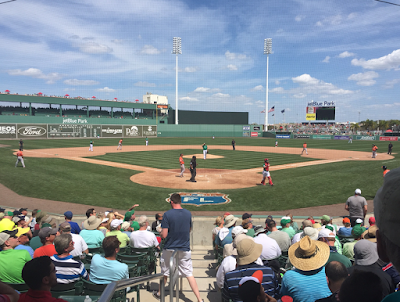 Just got back from a week in Ft. Myers.

Good for you, but how do they look?

Many pundits have predicted a real bounce-back year. USA Today predicts the Red Sox to win 88 games and finish 1st in the AL East. Didn't they predict that last year as well? Or maybe that was in 2014.

In a bad news-good news scenario I always prefer the bad news first so we get a nice finish. The pitching rotation was supposedly already set, with ace David Price, Clay Buchholz, Rick Porcello, Eduardo Rodriguez (please stop calling him E-Rod-he may like it, but Boston fans do not) and Henry Owens. Or maybe Steven Wright. Eduardo subfluxated his knee and hash't pitched, so there's a competition for a starting spot.

Sunday was not a quality start for Rick Porcello. 10 hits and 8 earned runs over three innings. On Monday Brian Johnson came in to face the Pirates with a 1-0 lead in the 6th and gave up four straight hits and got nobody out before being pulled. Thee runs across and he got the loss. I was rooting for Brian, because, like Joe Kelly, he's an alum of the Yarmouth-Dennis Red Sox of the Cape Cod League, but that was a D performance.

On Tuesday Robbie Ross Jr. did himself no favors. He started the 8th inning against the Yankees. It was a 1-1 tie. He hit the first batter, got a K, then gave up a double, a single, one out later a guy reached on an error (by Ross), followed by a walk, a double, a single and another hit batter. Seven batters reached, five scored. He took the loss. And it was the 8th, so he wasn't even facing any Yankee starters.

On Wednesday Clay started an away game. He wasn't horrible but was shaky. Gave up 3 runs over 4 innings on 3 hits, 3 walks and 2 K's. A C+ outing. Clay likes to say that in spring training he's working on mechanics, not really trying to get guys out. Maybe. Trailing 3-1, Koji came in to pitch the 5th. Why so early, you ask? Because in spring training games the regulars are all replaced by wannabes by the 7th inning and they want to see him face real Major League hitters. Like Johnson and Ross, he didn't do himself any favors either. Koji got a quick out. Twins fans sitting behind me were asking how can do that when he's only throwing 82? I told them it was his very high spin rate. But wait. Uehara then gave up a single and a home run. One out later there was another single, a walk and a double. At this point the Sox were down 7-1. Out comes Koji. 2/3 of an inning, 4 hits, 4 runs, one walk, no strikeouts. ERA of 27.00. He was great in 2013, but this was a D.

Henry Owens, vying for that 5th starter's spot, faced the Orioles and didn't get through the 3rd inning. A leadoff single erased by a double-play in the 1st. A two-out single followed by a double then a 3-run homer in the second. It was his second straight bad outing.

At this point in spring training they like to see a starter get through four innings. On Monday Joe Kelly faced the Pirates and gave up a one-out single. The next batter hit a routine 4-6-3 double-play ball, but Xander bobbled it on the transfer. The out was recorded but the batter reached on a fielder's choice because you cannot assume a double-play. No no error and no hit. A walk and two singles in the 2nd produced nothing, the 3rd was 1-2-3, and the 4th saw a hit batter and an error by guess who? (we'll get to that) but nothing across. Four innings, 3 hits, no runs, 1 walk, 3 K's. An A outing.

In his first two appearances Price gave up four home runs: one on his very first pitch, then back-to-back in the 3rd. By his second start, on Tuesday night facing the Yankees, he scattered three hits over four innings. A leadoff home run by Aaron Hicks in the 3rd inning was the only damage. No walks, two strikeouts. I give him an A-.

New closer Craig Kimbrel had a 1-2-3 inning. Carson Smith and Tazawa did as well. So the pitching looks better than last year, but there are some pretty big question marks.

Defense. Really only two people worth mentioning here: Pablo and Hanley. Pablo has been charged with 4 errors, but official scorers are very generous in spring training and you could make a case for several more. The first shocker for me was when this guy on the Pirates hits a shot down the 3rd base line. Pablo dives to his right, picks it, then drops it, then picks it up and makes a low throw in the dirt to 1st. And woah...Hanley scoops it and the guy is out on a bang-bang. This sort of thing happened several times. A grounder to 3rd, Pablo bobbles it, makes a bad throw and Hanley pulls it in. There were several other "hits" toward 3rd that a nimbler guy than Pablo...like Youk, or Mike Lowell, or Bill Mueller or John Valentin or Wade Boggs or Frank Malzone or...Travis Shaw...would have likely handled. Hanley, though, is a surprise. The worst outfielder in the history of the Red Sox looks like he's a pretty good 1st baseman. Go figure. I should also mention Christian Vasquez. He says he is fully recovered from Tommy John surgery, but on the first attempted steal he threw high and wide to second. Dustin Pedroia had to leap to catch it. He also made several poor "comin' down" throws at the end of between-innings warmups so he's probably not quite all the way back.

Mookie Betts is looking great. So is Pedey. Xander is off to a slow start. So is JBJ. Travis Shaw is on fire. He's great at bat and defensively. So is Sam Travis. Travis S. and S. Travis. #47 and #74. Easily confused. A word of caution: hitters can light it up in spring training and then fall flat in April. Think Jackie Bradley Jr. in 2013, Grady Sizemore in 2014 and Mike Napoli in 2015. Maybe it's the pitchers not trying that hard in March. But the game is more fun when Travis and Travis are on the field. And Chris Young. I'm also rooting for David Murphy to make the team. A good guy they never should have traded.

Ortiz is going through the motions. Two at-bats in every other game. At the game against the Yankees a typical loud-mouth Yankee fan yells, "Come on, strike him out!" I'm thinking that will not happen. He'll swing at the 1st or second pitch and pop it up or whatever. Unlike Pablo, Papi has nothing to prove. He's the DH, and no one is challenging him. 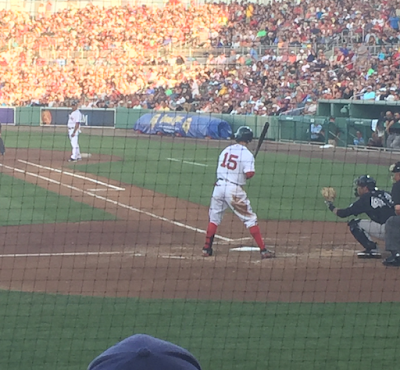 This may sound trivial, but I think it's important. Many of the Red Sox were featuring red socks. In the game against the Yankees, the pitcher (Price), all the infielders (Hanley, Pedey, Xander and Pablo), all the outfielders (Rusney, David Murphy and Chris Young) and the catcher (Blake Swihart) all wore their socks high. It looked great. Like they're all ready to play, dammit. If these were the Arizona Diamondbacks I wouldn't even mention it, but there are the red Sox. Let's see those red socks!