Rando thoughts on the World Series

Weighing in
Four of the five fattest ballplayers were in the series this year. This is not to say they're not good, just that they're fat.

One is a Giant, Pablo Sandoval. Nickname is Kung Fu Panda. 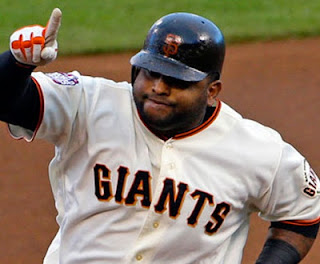 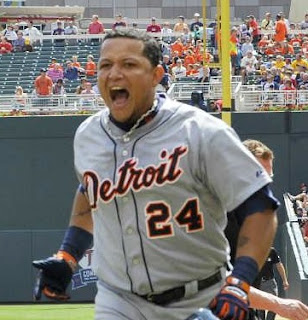 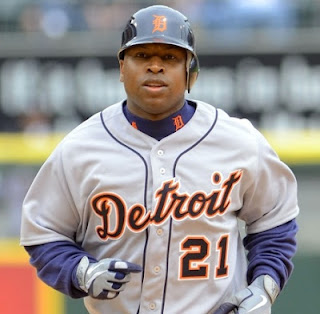 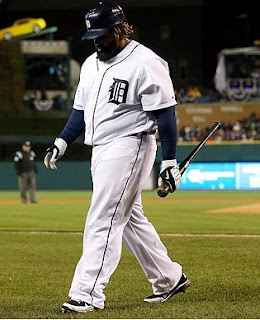 The fifth and biggest wide load is CC Sabathia, a Yankee. 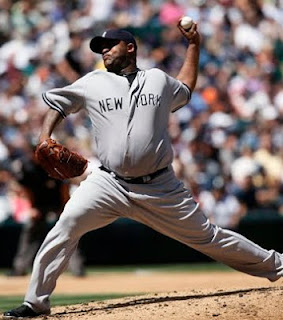 Is that a wig beard?
The two craziest beards among active players were both in the series. Prince Fielder of the Tigers and Sergio Romo of the Giants. 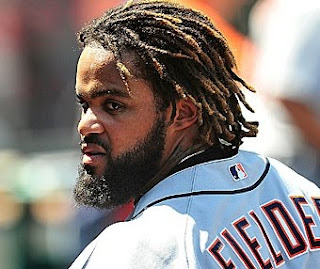 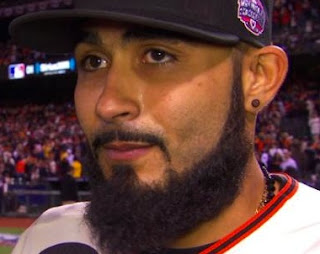 Brian Wilson of the Giants has an even crazier one, but he's recovering from Tommy John surgery and did not play. 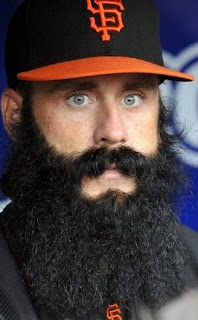 I'm calling the beards crazy only because they look like fake beards from a Halloween costume or a Saturday Night Live bit.

The good news
The #1 choice each year is for the Red Sox to win the World Series. The #2 choice is Anybody but the Yankees. Not only did the Yankees not win, they didn't even get there. So it was a good season.

Posted by Unknown at 2:09 PM No comments:

One day about three years ago I was driving down Oak Street in my hometown of Wellesley MA. On the sidewalk was a man with white hair who looked to be 80-something. He waved me down and I pulled over to see if he needed help of some sort. He said he was fine, but just wanted to ask me about my license plate. 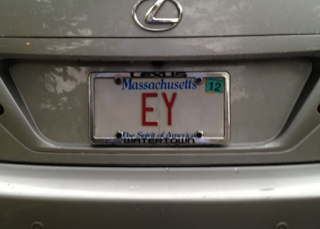 "Are those your initials?" I replied that they are not, that's the way I spell Kelley. With an EY at the end. I learned years ago that you can't say, "Kelley...with two E's" because people will starting writing Keelly. So I got my EY plate. I've ben asked about EY on many occasions. Usually I'm asked if I work for Ernst & Young. Once in a while I'll get a Fonzie from "Happy Days" reference. (Remember he often responded to something with, "Eeeeyyyy!" and there were Eeeeyyy bumper stickers in the 70's?) The man told me that those are his initials and not many people have them. He said his name was Eddie Yost. 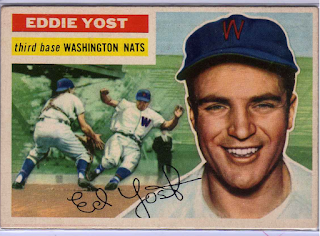 I knew about Eddie Yost. He played for the Washington Senators - the team that is now the Minnesota Twins, not to be confused with the other Washington Senators who became the Texas Rangers. (Note on the above Yost baseball card they called the Senators the "Nats" - the same nickname today's Washington Nationals use.) Yost was a lead-off guy and specialized in getting on base via walks. His career on-base percentage is higher than Derek Jeter's. He lead the majors in walks six times, earning himself the nickname The Walking Man. I remember seeing him play on Opening Day at Griffith Stadium in Washington DC. We actually had 1st row seats that my father got from Sen. Leverett Saltonstall (R-Mass). Yost went 2 for 5 with 2 rbi's - and a walk - and 1 run scored as the Senators beat the Red Sox.

So I told Eddie Yost that I had worked for many years with Gay Vernon, daughter of Mickey Vernon, two-time AL Batting Champion and his long-time Washington Senators teammate. The Senators - the second version, the ones who moved to Texas - were an expansion team in 1961. Like the original Senators, they were horrible. Lost over 100 games the first several years. The first manager was Mickey Vernon, who was replaced with Eddie Yost. A couple of managers later they hired Ted Williams. This is proof that even a great ballplayer cannot succeed as a manager if the team itself has minimal talent. Eddie Yost subsequently moved to Wellesley and was the Red Sox 3rd base coach for eight seasons. When he got off the merry-go-round and retired he took up restoring antique merry-go-round horses. Eddie Yost, The Walking Man, was a chatty guy when you passed him on the street. This week he passed away at the age of 86.

Posted by Unknown at 6:33 PM No comments:

Not an off-the-wall experience, but not a fan experience either. 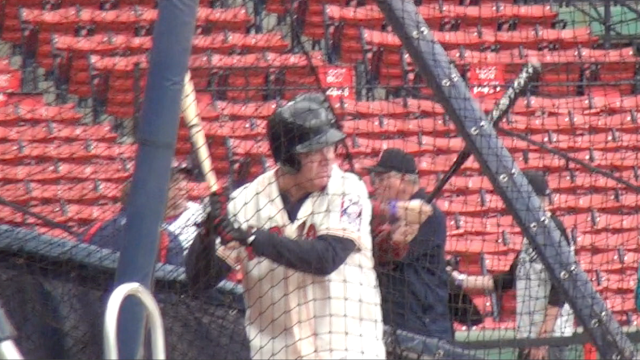 I wore my official Ted Williams #9 home shirt with the 1939 seal on the sleeve, blue undersleeves (like they wore in Ted's day), and a nicely broken-in hat.  Kathy went with me to record it for posterity.  As I was checking in the Sox representative said if I hit the wall he'd comp me my season tickets for 2013.

They took us in through the visitor's locker room, down the walkway under the grandstand, up into the visitor's dugout, then onto the field.  I could choose from wood or metal bats and went with wood.  I could probably have hit the ball farther with a metal bat, but using a real wood bat is way more fun.  The bat was heavier than I would have preferred, but I could swing it.  I found a helmet in my size and headed for home plate.

They announced me on the PA.  "Now batting, number 9, 'the Don'...Don Kelley." The entire at-bat was on the Jumbotron, but I didn't know that until afterward because I was concentrating on seeing the ball real good.

I had gone to the batting cages on Cape Cod in the morning to take some practice BP both left-handed and right-handed.  Baseball medium-fast.  I had surprised myself by hitting some respectable fly balls righty, so at Fenway I decided to go up there righty and use a Dewey stance.

Five pitches.  I connected on every one of them.  Only fouled one back.  One of them I hit to short and figured if Lugo were playing I might well be on base.  That white blotch next to the edge of the batting cage, above the guy in the red shirt, is the ball soaring toward short. 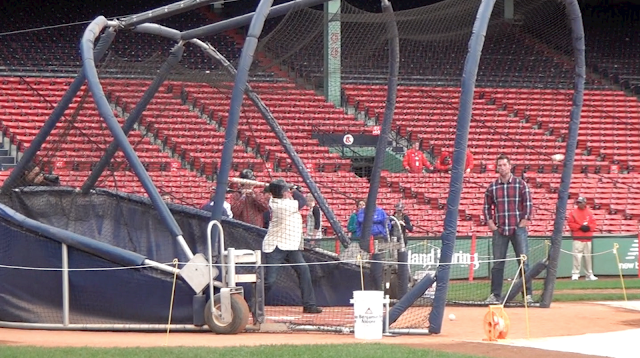 Afterward we headed to the Red Sox dugout, took some shots sitting on the bench, standing up the railing looking concerned, walking down the gangway to the Red Sox clubhouse looking disgusted, like I'd just been tossed for arguing a close call that went the wrong way.

Then we posed with the two World Series trophies and went up on the Green Monster for some more shots.  It was not an off-the-wall experience (while I was there no one came anywhere near hitting the wall), but I didn't swing and miss at all, so it wasn't a fan experience. It was the most fun I've had at Fenway without seeing a game.

Posted by Unknown at 6:11 PM No comments:

The Big Debate - right or left?

No, not between Obama and Romney, or Biden and Ryan, or Brown and Warren, or even Tierney and Tisei.

On Monday at 2:30 I have an appointment at Fenway Park.  I get to take batting practice.  At home plate.  5 pitches.

Red Sox CEO Sam Kennedy invited season ticket holders to take batting practice at home plate. It's a way of saying thanks for sticking with us during this horrific season.

I do almost everything left-handed, but I can actually hit from either side.  So my big debate is whether to go up swinging from the right side or the left side.  I will probably swing and miss at all five pitches, so it really doesn't matter.

I have a better chance of hitting the wall batting from the right side.  In my dreams.  Maybe they'll let me switch sides halfway though.  No, that won't happen.  I will toss and turn thinking about it tonight, but I know I will thoroughly enjoy it either way.  Even if I miss all five.
Posted by Unknown at 10:50 PM No comments:

Bobby V being shown the door the day after the Red Sox season finally ended was no surprise.  The surprise would have been if they waited for the weekend so it wouldn't make the front page.  But everyone knew the other shoe would drop, and John, Tom and Larry had no need to prolong the obvious, and had the decency to get it over with before the playoffs begin.

Here's how I cut up the blame pie.  I should point out that I have professional experience cutting pies;  in high school I worked at Howard Johnson's in Wellesley and a portion of the the work was cutting slices of pie. Cutting that first piece neatly is an art. Usually it was apple pie that was kept in a heated drawer.  Customers would get a piping hot slice with vanilla ice cream melting on it and think it just came out of the oven.  In truth, it had probably been in the heated drawer for a couple of weeks.

10% to Ownership.  They didn't really want Bobby but hired him anyway because no one better was available.  And they got rid of him when they needed to.

5% to Ben Cherington.  He wanted Dale Sveum, but Dale had no managerial experience and people couldn't even spell his name, let alone pronounce it.  Ownership overruled Ben.

20% to the starting pitching.  Most people would put more of the blame on the starters, and there were a lot of horrible first innings, but Lester, Buchholz, DuBront and even Beckett had a surprising number of Quality Starts that did not result in wins.  (A Quality Start means you went five full innings giving up three earned runs or less.)  Why?  Because either Bobby V left them in until after they had run out of gas or the bullpen blew it on them.  If you don't count Dice-K and Aaron Cook in this section, the number is probably down to 15%.  (Dice-K actually won a game - one run over 8 innings in a 5-1 win in an afternoon game on August 27th.  I was there.)

20% to the bullpen.  I kept hearing hosts on WEEI and announcers on national network games saying the problem was starting pitching and the bullpen had been pretty good, but I completely disagree.  Alfredo Aceves was horrible two times out of three.  His Blown Save count is deceptively low because it doesn't count the times when he gave up a four-run lead, or came in with the game tied and gave it up.  Remember John "Waaay back" Wasdin?  Aceves could be called Alfredo "That's a two-run homer" Aceves.  Or Alfredo Blown-Seves.  Andrew Miller was all over the place, often unable to retire the one hitter he faced.  Andrew Bailey, when he finally showed up, was ok at best.  I saw him in spring training.  They brought him in the the 6th inning and he immediately gave up 6 straight hits.  This was supposed to be our Papelbon replacement? Yikes. To be fair, Junichi Tazawa was a pleasant surprise most of the time and Craig Breslow wasn't too bad.

20% to injuries.  Almost half the roster was on the DL at least once.  Those who came back didn't play to their potential.  Ellsbury missed the majority of the season and performed well below his fabulous 2011.  (But I definitelty want him to stay!)  Nobody expected much from Crawford, and in his place Daniel Nava did better than Crawford in 2011.  So that injury doesn't add much.  Andrew Bailey has already been dumped on above.  Ortiz going down in July hurt a lot.  The various guys filling in as DH collectively batted something like 100 points lower than Ortiz with no home runs.  Scott Atchison getting hurt?  Didn't matter.

5% to player and coach attitude.  Not a high number, and that's because it was brought on by... 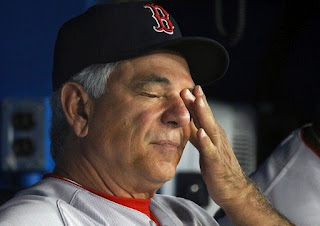 20% to Bobby V.  At least.  He made it too much about himself.  He mispronounced player's names. He left pitchers in too long.  8 innings out of Daniel Bard, who was used to pitching only the 8th?  Youk wasn't trying hard enough?  Putting Punto in the lineup when he was batting .178 because he liked him?  Salty as DH...batting .220-something?  Aceves as the closer?  Not bringing Ciriaco up until late July?  Come on. That's not how we do it around here.

Posted by Unknown at 7:51 PM No comments: