Halftime Report: How Bad Are the Red Sox?

This is the only night of the year when there are no professional sports events, so it seems like a good time to post this. 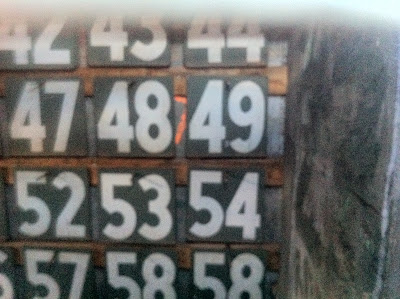 Not as bad as you may think.
It all depends on how you look at it, of course. In recent years, the results have been all over the place.

In 2011, the final Francona year, the team had a very slow start in April, but were the best team in all of baseball from May 1st to September 1st. Started the final month in 1st place with a 1-game lead, and a 9-1/2 game Wild Card lead. Then the wheels came off and they were eliminated from the playoffs on the final day of the regular season.

2012, the Bobby Valentine year, was a punch line from gavel to gavel.

2013 was one for the ages, of course, and it will keep me smiling and coming back for a long time.

So why has 2014 been so bad?
Poor pitching by three of the five starters, a couple of bad reliever signings, several of last year's best hitters off to a really slow start, a maddening inability to get a hit with runners in scoring position and promising rookies who have impressive defensive skills but can't hit major league pitching.

Player breakdown.
Felix Dubront looked iffy in spring training and was mostly terrible in his starts. Jake Peavy can't keep the ball in the yard. Clay Buchholz has been a shadow of last year (and a slim shadow at that). Add to that a couple of bad outings by Jon lester and John Lackey as well as several excellent outings by both of them but with little or no run support and that's a chunk of your problem.

Add to that the loss of .300 hitter Ellsbury leading off being initially replaced in the order by Daniel Nava, who also hit .300 last year but opened 2014 hitting about .110. Grady Sizemore was so good in spring training, hitting .365, that he was given the starting center field job but couldn't hold it. Jackie Bradley Jr. lead the team in strikeouts during spring training and was supposed to open the season in Pawtucket until Shane Victorino was hurt. JBJ wound up getting the CF job anyway, and has been excellent defensively, but strikes out way too often. Xander Bogaerts was handed the starting shortstop job and was okay, but didn't look like the #2 overall prospect in all of baseball. But wait...when Stephen Drew was finally signed in May, Bogaerts suddenly came alive, making great plays at short and hitting .300 while Drew was getting a late spring training in Pawtucket. Then, when Drew finally got to Boston, Bogey moved to 3rd base. His defensive skills got shaky and his batting average took a precipitous dive to .235 and he leads the team in strikeouts. Behind the plate, AJ Piersynski dropped a lot of pitches and didn't show much power. He also annoyed John Farrell by constantly swinging at the first pitch - exactly what the Red Sox hitting coaches discourage.

Is it getting better?
Definitely. All you have to do is look at stats from the last 30 days and the difference is clear.

Think of this.
When Jon Lester (who should get a new deal right now while we're in the All-Star break) pitches, meaning Ross is catching, and you have Bogaerts at 3rd, Drew at short and Gomes in left, one-third of the batting order is under the Mendoza line. Four of the nine are hitting under .210.

Bottom line:
Lester is pitching well. So is Lackey. Buchholz is coming around. Andrew Miller is best used as a spot guy facing lefties. Don't use him as a closer. They could lose both Peavy and Mujica and no one would complain.

Can they contend in 2014?
Ummm...not sure. Maybe. They're 9.5 games out, in last place by percentage points. But hold on...on this date in 1978 the Yankees were 13.5 games out of 1st place, but they rebounded in the 2nd half, beat the Red Sox in the Bucky "Bleeping" Dent playoff game and won the World Series. So it can be done.

Posted by Unknown at 9:11 PM No comments: