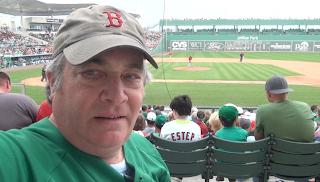 Okay, I've been remiss.
I went to Spring Training in March and never wrote about it. But it was fun. I went to Opening Day at Fenway and didn't write about it. Sorry.

But here we are, 9 games into the season and at the end of the first home stand.

So how are they doing?
Here's my take. In Ft. Myers Grady Sizemore looked very good. He hit well, ran the bases well, showed a lot of defensive range, made great catches. I was not surprised that he made the team and was named the starting center fielder.

Jackie Bradley, Jr. was the phenom of spring training last year and made the Opening Day roster, but couldn't hit big league pitching. This year he was the presumed replacement in center for Jacoby Ellsbury, but in spring training once again he couldn't hit. He batted .167 and lead the team in strikeouts. On the last day of spring training John Farrell announced that Sizemore is the starting center fielder and JBJ is going to Pawtucket.

Have you heard the Southwest spots for $69 airfares?
Hang on a sec. Shane Victorino pulls a hammy in the final Ft. Myers game, and JBJ gets a call from Farrell telling him to hop one of those $69 Southwest flights from T.F. Green in Providence to BWI and be in uniform for Opening Day at Camden Yards.

How'd he do?
He pinch hit in the 9th with the tying run in scoring position and...struck out.

But since then...
He wound up playing right field in several games and is hitting .400 and has less than half the strikeouts that Napoli and Gomes have. He's also made several great catches and is looking like the phenom we expected last year.

What about the other guys?
I saw Burke Badenhop twice in Florida and he looked horrible both times. In Boston he looked not particularly sharp the first time, then horrible the second time. On Tuesday he relieved Felix Dubront, who was having a dreadful night, and was as bad as Dubront, if not worse. I couldn't help wondering why they signed Badenhop. Yes, he wears his socks high (something they all should do, IMHO), but other than that brings little to the table. I'll be surprised if he makes it past the trading deadline.

Tell me about Dubront.
Four outings in Florida. Two were pretty good, two were disasters. In the regular season he had an okay, not great, start and got the win. Start #2 against Texas was the worst of his career. Two shutout innings, then a ridiculous third where he gave up 5 runs and couldn't get out of the inning. Badenhop comes in and gets out of further trouble in the 3rd, but gives up four more runs in the 4rd and 5th innings. Over the course of three innings we wound up being down, 9-0. In comes Brandon Workman, who throws three perfect innings. He does give up a run in the 9th, but you have to wonder why Workman didn't come in to replace Dubront back in the 3rd. Workman was rewarded for his excellent performance by being optioned to Pawtucket right after the game.

That's not as bad as it sounds.
The plan is to make Workman a starter, thus the temporary move to the Paw Sox to stretch him out. Expect him back and in the rotation before long.

Pedroia? Ortiz?
Dustin looks good, as always. He has grounded into a couple of double-plays and only has one RBI, but that's because the leadoff guys, Daniel Nava and Jonny Gomes, are batting something like .116 so Pedey has no one to knock in. And they're both slow, thus the GIDP's. Ortiz did nothing at the plate in spring training, and has hit the ball hard but not far enough over the last week or so. He does have two homers, including the game-winner on Wednesday afternoon.

Lester? Lackey? Peavy? Buchholz?
Lester has looked good but hasn't gotten much run support. Lackey is 2-0 with an ERA of .138 and seems to be a completely different guy from the 2011 pre-Tommy John Lackey. Peavy hasn't won, but he hasn't lost either, and his ERA of .238 is pretty good. Bad news...other than Dubront being very iffy...the Buchholz start was scary. 13 hits and 6 runs over 4+ innings and an ERA of 12.46. Is he still hurt? What happened to the guy who threw a no-hitter in his second start in 2007?

Others?
I saw Middlebrooks in spring training and he was hitting well, but made three errors at 3rd. Two in one inning. Not sure about him. But then, I'm not Jenny Dell. Xander Bogarts has been a pleasant surprise at the plate, but is a little shaky at short. I've seen several balls get by him that Steven Drew probably would have gotten to.

What about Drew?
The Red Sox seem to be annoyed about Drew turning down their 14.1 million-dollar offer for one year. Evidence? When Middlebrooks went on the DL they went out and signed Ryan Roberts as a backup 3rd baseman and gave him Drew's #7 jersey. And no one has picked Drew up. Ouch.

It's on to Da Bronx.
They play the Yankees 7 times home and away over the next couple of weeks. It should be a good indication of whether the Red Sox have a Championship hangover and whether the Yankees are aging on the vine.

Posted by Unknown at 9:42 PM No comments: