Alex Cora named the 47th Manager of the Red Sox.

They had to wait until the ALCS ended to make it official, as MLB does not want major announcements made during the playoffs. I guess the 3-day layoff before the World Series starts on Tuesday night is a safe respite. It is a little like the Bill Parcells announcement about going to the New Jersey Jets while still coaching the Patriots in the 1997 Superbowl. But that wound up working out okay in the long haul. 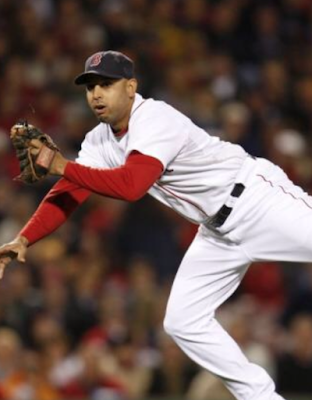 Cora played for 14 years in the Majors.

7 years with the Dodgers, half a season with the Indians, three and a half with the Red Sox, two with the Mets, one each with the Rangers and Nationals. The Dodgers finished 2nd or 3rd every year he played there, except for 2004 when they finished 1st, but we all know who won that year.

In 2005 Cora came to the Sox at the trading deadline and the team won the Wild Card and went to the playoffs for the 3rd year in a row, but suffered from the World Series Hangover and were swept by the White Sox, who went on to end their own 88-year drought (1917-2005). Around that time I often wondered why there was so much attention on the Red Sox "Curse of the Bambino" 86-year curse when there were two teams - both from Chicago - that had gone longer. In the case of the White Sox I guess it's because people don't really care about them that much. Just ask Chris Sale.

Other than 2010, when the Rangers finished first, Cora was never on a team that went to the playoffs.

Except for the Red Sox.

So he'll get the Boston media thing.

Which many people from elsewhere do not. Cora has been here a world championship and for almost-but-not-quite-enough flop endings. He'll get it.

Alex is from Puerto Rico, meaning he's fluent in Spanish as well as English. This is a good thing for almost anyone, but should be especially helpful given the increasing number of Latin players on the Red Sox roster and in their system.

In the meantime, my #2 World Series Preference has come true. Yep. #1 was the Red Sox, of course, and #2 was Anybody but the Yankees. And that's what it will be.