You see it and hear it all over the place in Havana.

One year ago, on January 21st, we flew from JFK to Havana. It was the first full day of the Trump presidency and we were headed out of the US and to a Communist country. It actually wasn't a political statement. This trip was planned months in advance.

You needed a State Department excuse.

Today this would not work, but we were on a painting trip. Painting as in art, not houses. 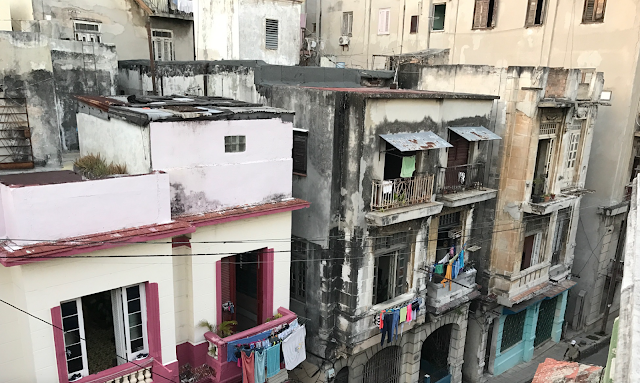 In Cuba nobody paints their casa.

For good reason. You don't own it. You can own the inside, much like a condo, and you can make that as nice as you can afford to. But the building itself - the outside - is owned by the government. Whatever it cost to paint it, you'd never get your money back.

There are no credit cards, no ATM's. You can safely leave home without your Amex Gold Card because it's not accepted anywhere on the island. Same with US Dollars. We had to go to Bank of America in our home town and exchange dollars for Euros, then exchange the Euros for CUC's (Cuban Convertible Currency) in Havana.

JFK instituted the embargo back in 1962, around the time of the Cuban Missile Crisis. President Obama loosened things up a little back in 2015, but there is still nothing American in Cuba. There are no stores to speak of. The few little bodegas have no sign and very little inside. They're small, dark and have shelves that are mostly empty. There's a lot of bartering...if the store has bread the day you go in, you might buy two loaves and then swap one to someone else who was lucky enough to go there on the day they had milk.

Bring your own TP.

Seriously. They sell flat rolls of it on Amazon and you should pack a few. When you go to use the banyo at a restaurant in Cuba you'll find that there's 1) no toilet paper 2) no seat 3) a lady sitting outside at a small desk who will charge you one CUC for the privilege. Bring your own toothpaste and shampoo and nail clipper, because there's no Walgreen's at the corner of happy and healthy to buy them.

You never see a newspaper stand. Or anyone reading a newspaper. CNN is on TV, but it's en espanol and from either Puerto Rico or Mexico. Spanish FM pop music stations are from Miami. The Internet is not allowed in homes in Cuba. You can find a few wifi hotspots (I called them lukewarm spots because they're only in a few small parks in the city and they're in "Slooowwwsky" mode). To get access you have to go to a government kiosk. No sign saying that's what it is..you have to ask someone...and buy an internet access card. 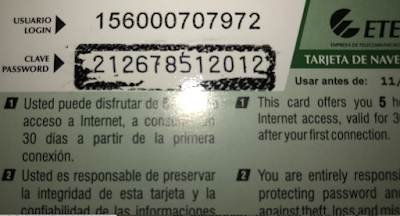 You have to have to show them your passport and visa to get one. It's good for two hours. When you find a lukewarm spot to try and log in you'll eat up half of your precious two hours watching the "pinwheel of death" while it tries to connect. Once it does, don't read anything. Just download it and read offline later. Data is about $35 an hour. Remember, the average Cuban makes about $20 a month, or about 11 cents an hour. That's not a joke.

But Cubans are happy and healthy.

We had a fabulous tour guide who gave us the inside scoop on a lot of how things work there. He said, "There's a lot of poverty, but no misery." Health care is free. At Havana University there is no tuition. You have no be smart enough to get in, but you come out with zero student debt.

Only old ones. As old as 1946, and nothing newer than 1959, the year that Fidel Castro took over. Most are 1952-1957. Lots of Chevys and Fords, but also a decent number of Buicks, Dodges and Plymouths. Even an occasional Studebaker, DeSoto, Packard or Henry J. Some are beautifully restored convertibles, especially in the touristy Old Havana area. Others are just old cars that are still chugging away after 60 years. Some are cobbled together with non-original parts. Say you're driving a 1951 Plymouth and you blow out a rear light. There's no Auto Zone where you can buy a new one. You have to make it yourself.

Mileage to the moon and back. Manual transmission, three by the knee. The radio was AM only (nobody had FM in 1954 and there was nothing on it anyway) and it hadn't worked for a long time. The tubes had worn out and could not be replaced. Leaded fuel only, of course.

As you head down street after street you can see that Havana was like Paris...about 100 years ago. There aren't that many vehicles. People walk around all over the place. There are no electric signs - really no signs at all. There are no ads anywhere. No trash. No grafitti. No billboards, except an occasional political one with a slogan from Che Guevara. 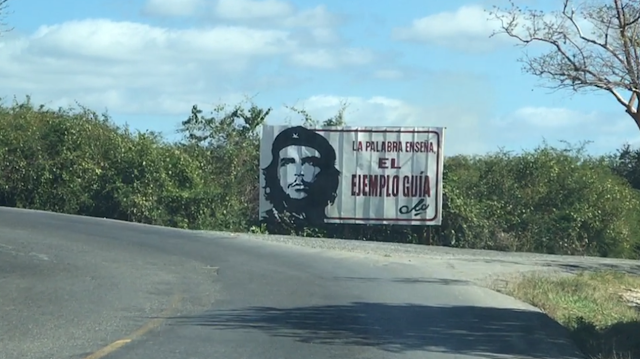 "The word teaches, the example guides"

That's actually inspirational more than political, but I didn't know that when I took the picture.

There are pictures of them all over the place. At the Museum of the Revolution you hear stories about how horrible things were under Fuljencio Batista and how everything got better under Castro. You hear about the Cuban Missile Crisis from their viewpoint, how Castro invited Khruschev to put missiles in Cuba because he believed the US was going at attack Cuba. After all, the CIA had tried that the year before. 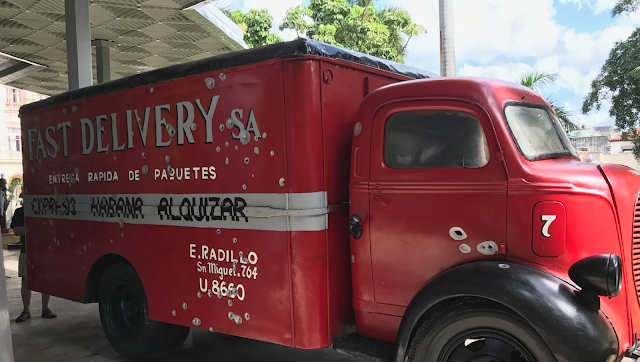 The bullet holes in this truck are from the Bay of Pigs invasion.

Tell me more about Cuba Libre.

It's on buildings, flags, t-shirts everywhere. It actually doesn't refer to the 1954-1959 revolution, it refers to the liberation of Cuba from 406 years of Spanish rule in 1898. Cuba had been a colony of Spain ever since Christopher Columbus landed there in 1492. This Cuba Libre war is what we know as the Spanish-American War, but in Cuba it was a guy named Jose Marti who is considered the National Hero for his part in the fight. We were at a huge rally for his 164th birthday. Raul Castro spoke, Jumbotron and all, and easily 10,000 marchers with torchlights (a candle in an empty soup can on top of a stick), "26 Julio" flags (July 26th is the day the Castro-Guevara Revolution began in 1954) and "Cuba Libre" flags followed him down to the waterfront. 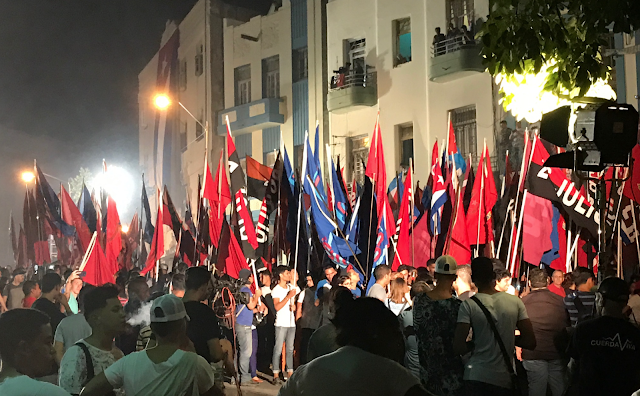 Raul's limo went right in front of us. Like 8 feet away tops. The next day our tour guide was saying, "Wow, you saw Raul?"

But the real Cuba Libre...

...is a rum and Coke. Or today, a rum and Cuba Cola. If you do get an actual Coca-Cola it's from Mexico, not Atlanta. Rum is the official drink of Cuba, and the official rum is Havana Club. I mentioned earlier that there are no ads anywhere...there is one big exception: every glass in every restaurant has a Havana Club logo. 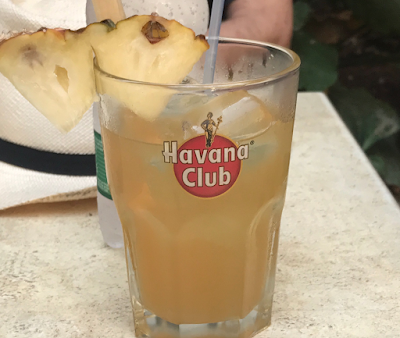 How did rum and Coke become a Cuba Libre?

Great. The first night I ordered a shrimp dish (on their menus it says "shrimps" - that way you know you're not getting just one - and I also asked if I could get some rice and beans with it. The waiter looked at me as if I had asked if I could have it served on a plate. It turns out that rice and beans (you don't have to call them Cuban beans - of course they're Cuban) come with everything you order anywhere on the island. This is not like a "do you want fries with that?" question. It doesn't matter whether you like them...you're getting rice and beans, period! Exclamation point at the end and an upside down one at the beginning. Lots of beef, seafood, chicken. Octopus salad, which I actually tried. 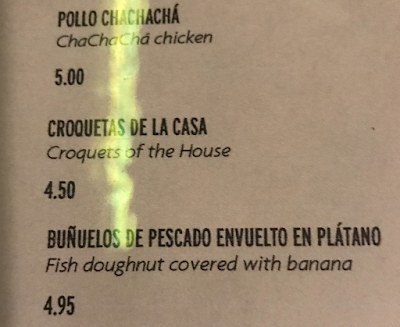 Yes, that actually says "Fish doughnut covered with banana" on the menu. Hey, Mr. Tally-man tally me banana, and put it on a fish doughnut, por favor. Or...I'd like the fish doughnut. Can you put a banana on it? Si. Of course you get rice and beans with it as well. Okay, I didn't try that...you've got to draw the line somewhere. But I did try the Pollo ChaChaCha. Mike Ehrmantraut and Mr. White would approve.

It's warm, there don't seem to be any bugs, and the stray dogs who are all over the place aren't that big and don't bother you while you eat.

One place had the menu items in Russian.

If you want to order "Tastes of the mountain the Cuban way" in Russian there's how you do it. 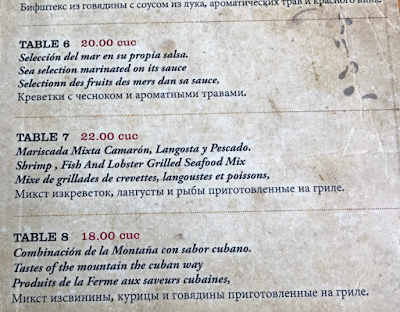 Breakfast in the Casa.

Outdoors on the roof, made specially by the Senorita de Casa. An omlette (Cuban, of course...she held the cheese at my request), fruit, juice, small cup of coffee with steamed milk. 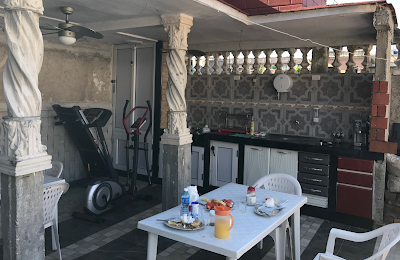 So much more to say.